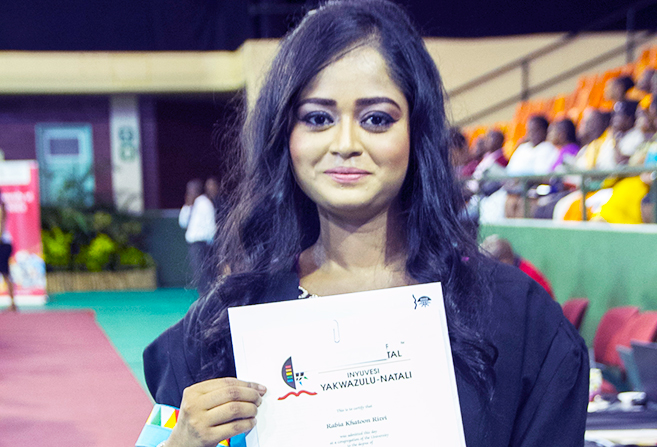 Armed with steely determination and a passion for learning, Ms Rabia Rizvi focused her research on how violent masculinities occur at a primary school in Chatsworth, Durban.

‘I chose to study gender education with a focus on masculinity and violence because I was exposed to violence from a young age, both in my home and the community we lived in.’

Rizvi, the eldest of five sisters, says that during her studies she was under pressure to rather go out and work to support the family, while her parents were also keen for her to get married.

But she was determined to complete her degree and continued studying.

‘The topic for my thesis allowed me to understand the link between violence and masculinity in a clearer way. It also allowed me to make peace with my own experiences.’

Her study explores how boys understand what it means to be masculine and how engaging in gender violence and homophobia play a big role in defining themselves as “real men”.

‘South Africa is a highly violent society and this spills over into schools,’ said Rizvi. ‘Thus, it is deemed acceptable for a boy to engage in gender violence as a way of fitting into society. As a result, this continues the cycle of abuse and violence that plagues South Africa as well as contributing to widening the gender gap.’

The findings of her study show that violent masculinities are constructed and enacted at the school where she did the research.  Also revealed was that boys have different understandings of violence, some of which are very limited.

‘These elements play a critical role in ensuring that violent boys maintain power, dominance and hegemony over the rest of the learners. As a result, these elements serve to broaden gender inequalities between boys and girls as well as create a hierarchy of masculinity among the boys, whereby violent boys are dominant and the others subordinated,’ she said.

Rizvi believes her study will help teachers to better understand the problem of gender violence at school and the need for measures to be put in place for it to be curbed.

‘Schools should be safe spaces in which youngsters learn without feeling threatened. Teachers can also create platforms on which peaceful masculinities can be promoted in school that allow boys to express themselves in ways other than the use of violence.’

Rizvi thanked her sisters for their help and motivation and her supervisor, Professor Deevia Bhana, for her guidance and support.