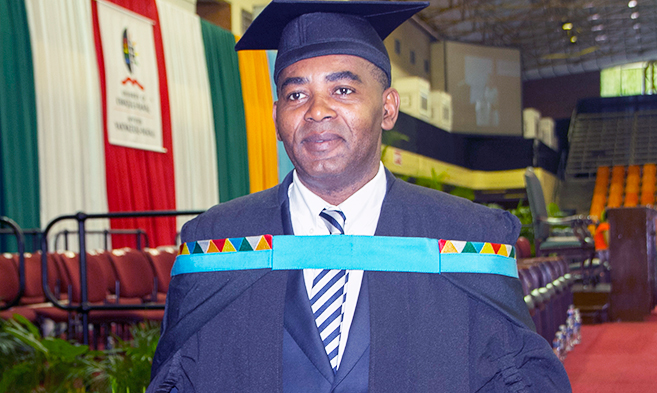 Mr Siyanda Ngcobo who received his Master’s degree in Education.

Research for a Master’s Degree in Education examined how schoolgirls aged between 13 and 18 interpret the ways in which unequal power relations impact on their access to education, exposure to sexual violence in their schools and their social environment.

The investigation was done by Mr Siyanda Ngcobo, who teacAhes at the Kwa-Mathanda High School in Umlazi.  Despite lacking basic computational skills and having little understanding of writing conventions and research, he prevailed and graduated saying, ‘I feel great. This is unbelievable.’

Ngcobo’s observation of learners’ changing behaviours and his interaction with them on various issues in school, developed his interest for this particular study.

He explained: ‘In all reported cases of gender violence, girls in school came out as victims and this enabled me to ask myself a series of questions, such as: “Why are these young girls so vulnerable to multiple forms of abuse and no one does anything about it?” My teaching experience and paying attention to gender sensitive issues, provided me with the raw material that eventually produced my study.’

Ngcobo discovered that gender violence against girls was prevalent and there were little or no interventions to protect them in schools. Culture, families and communities were found to be a by-product of their vulnerability to gender violence because of a failure to intervene. He also identified that the schoolgirls had a clear understanding that all violence was gendered and embedded in gender inequalities.

‘Their commitment to resist and challenge multiple forms of gender inequalities is meaningless without the presence of a gender equality policy as well as the involvement of parents and social services such as the police to provide support. The participants want to achieve change and justice against gender disparities and they did this by advocating for the protection of their dignity and sexual identity.’

Ngcobo, who plans to do his PhD, hopes his research will benefit society by empowering young girls and women to resist and challenge all forms of oppression as well as subverting the view points of the dominating groups in society.

He thanked his family, friends and supervisor Professor Deevia Bhana for their support and encouragement. ‘To my family, your emphasis on the importance of education has finally paid off. You laid the foundations of this educational journey some years ago and I’m continuing where you left off.

‘To my friends at work, thank you for your boundless support in our attempt to democratise our school. We need to continue with our pro-transformation and democratic discourse of challenging the outstanding totalitarianism and individualism for social change.’

His advice to other researchers is to work hard, remain committed and to have self-belief.