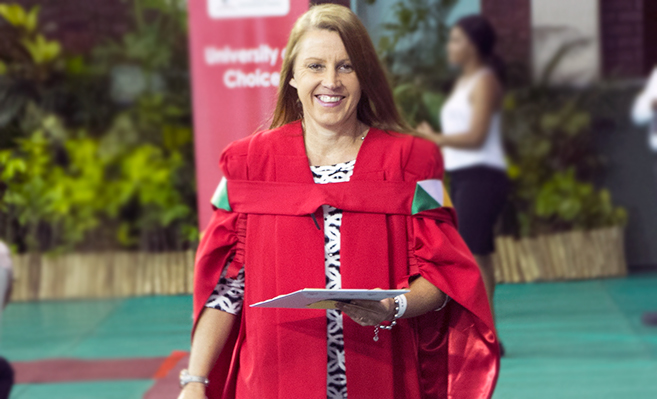 Dr Barbara Bowley graduated with a PhD in Education.

‘Surreal, that’s what it feels like to graduate with a PhD. It has consumed so much of my life, I don’t quite know what to do now!’ said Dr Barbara Bowley, after graduating with a PhD in Education.

Bowley, who has been teaching at an all-boys school for the past 20 years, produced a thesis on the influential role that sport plays in the social construction of young masculinities.

Information and data for this study was generated from an 18-month-long participant observation as well as interviews with boys from the school.

‘Boys are desperate when they arrive in year eight to create a name for themselves and to be accepted,’ said Bowley. ‘Sport is an area where they can create this identity for themselves and be accepted into the school. But boys soon learn that sport is also an area of great divide and an area for exclusion, rather than acceptance.

‘During the complex construction of these masculine identities, the boys in this research, battle with issues of race, class and sexuality; all of which are intertwined in their construction.’

Bowley argues that there is a hierarchy of masculinities and a pecking order of power relations and those who do not meet the hegemonic (dominant) ideal are relegated to the position of subordinate “other”.

According to Bowley, her research is particularly significant given the current changes in schooling in South Africa and the message that sport contributes to nation building. Her study regards sport as a positive influence in the lives of these young men, with her overall findings indicating that many boys’ masculinity was indeed boosted through the sport they played.

Bowley was also part of a research group sponsored by the Dutch company Exactica to complete her proposal. The course involved meeting twice in the year to assist in writing a good proposal. ‘This was of enormous benefit as my proposal was drawn up within a year. Often this is a stumbling block for many students.’

Her advice to other researchers is to ‘set yourself goals – real, realistic goals and get them done. Discipline is the key and only word when doing work of this nature.’

Bowley described her doctoral journey as ‘a lonely and often soul – destroying one’. However, with the support and encouragement of family, friends, working with a PhD cluster and assistance from her supervisor, she graduated. ‘Words cannot express the gratitude I have. Their love was a quiet supporter and eternal motivator for me.’

What lies ahead now? ‘Certainly to write more. I have plans in my head but at the moment that is where they are stuck! I need to start putting pen to paper again.’