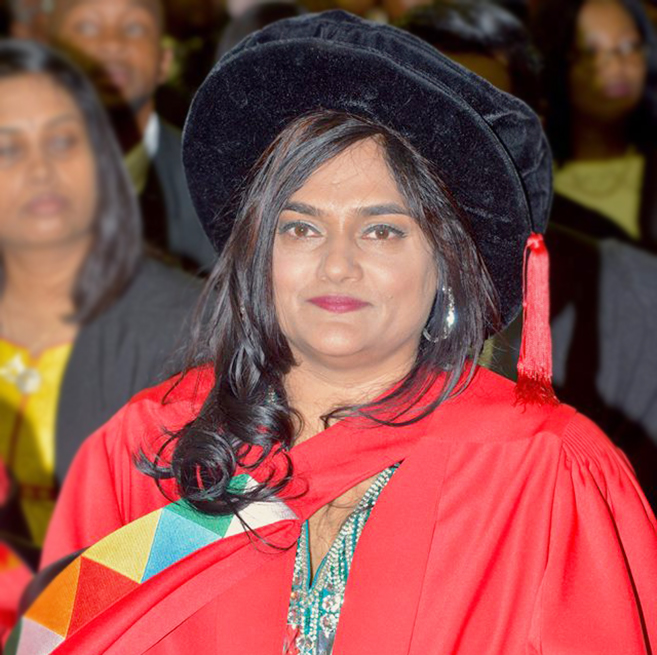 Dr Pryah Mahabeer, a Lecturer at the School of Education, graduates with a PhD in Education.

Dr Pryah Mahabeer, a lecturer from the School of Education, graduated with her PhD in Education for her research that explored the identities, experiences and imaginings of curriculum decision-makers engaged in the construction processes of numerous teacher education frameworks.

‘Over two decades into democracy in South Africa, stakeholders are still voicing disappointment with the quality of graduates and the advancing of the curriculum - both in education and teacher education that are strongly inter-linked.’

‘The demand for change has resulted in the introduction of various teacher education policies. The curriculum and the developing of the curriculum, mainly at national level has often been criticised for being politically reactive, pokerfaced, incoherent and not relevant within Higher Education in South Africa,’ explained Mahabeer.

Despite the move towards decentralisation and a shift to an egalitarian, all-inclusive approach to curriculum decision-making and development processes, her study recognised that the curriculum process is very complicated and requires creating a co-operative community of practice of utmost professionalism through vigorous conversation and debate.

The findings of Mahabeer’s study suggest that curriculum decision-makers are caught at the intersection of countless webs of influence. These webs are described as a confluence of ideas and biographies that lie at the core and drives their thinking - the web of transformational agendas, the web of institutional allegiance, the web of agency, the web of dialogical engagement, and the visionary web. Manifested as an ecological web of curriculum intellectualisation that defined the kinds of thinking acknowledging curricula within the dialogical process.

Mahabeer, who entered the University at a time of institutional transformation and development, was part of the Leadership and Equity Advancement Programme (LEAP) supported by the Carnegie Corporation of New York aimed at promoting Black women academics within academia in South Africa.

She dedicates this achievement to her late mother and father; she also thanked her supervisors, family, colleagues and friends, and the Carnegie Foundation for their support during the course of her PhD study.