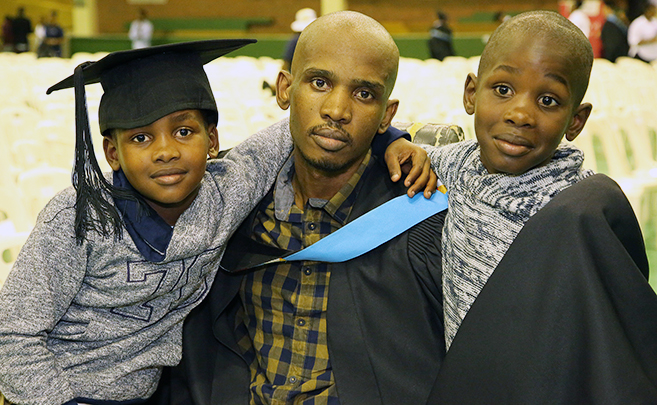 After being shot and wounded during a drug-related incident seven years ago, Mr Thulasizwe Cedric Mathenjwa turned his life around and has graduated from UKZN with a Social Science degree.

Mathenjwa, who sustained severe injuries leaving him partially paralysed, said the incident motivated him to start life afresh and work towards becoming a respectable citizen.

He spent 15 months recovering in hospital and when he was discharged he applied to study at UKZN.

‘After I finished my matric I was hustling, I got involved with drugs and with crime. My sons were toddlers when I was shot. I decided then that I was going to change my life and be a better person for them.’

Mathenjwa, who completed his degree with majors in Geography and Environmental Management, said he is passionate about the environment and politics and hopes to enter a career in those fields.

‘It has been very challenging to get to this point. Because of the paralysis I suffered from the shooting, I have had to complete oral examinations and that was not easy. Essays are very long and it is draining to speak for all that time’

He said he is very happy to have graduated and to have shared the moment with his two sons, Uyanda and Wanele.