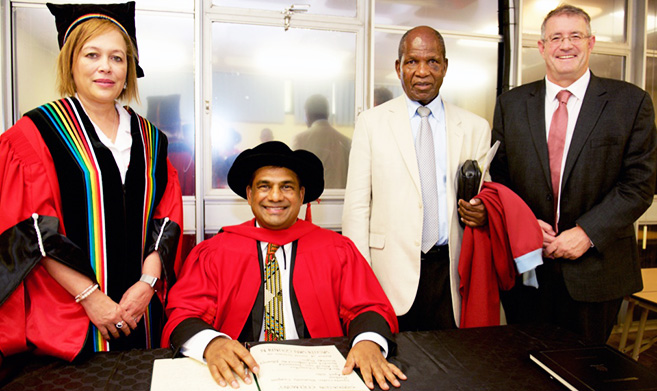 Founder and Executive Director of the African Centre for the Constructive Resolution of Disputes (ACCORD), Dr Vasudevan Gounden, was recently honoured by UKZN with a Doctorate of Social Science for his humanitarian work and leadership in conflict resolution in trouble torn countries like Burundi, Madagascar, the DRC, Somalia and South Sudan.

During his address, he reflected on his twenty five years in conflict resolution in various African countries stating, ‘I have seen hell. I have stared in the eyes of killers and in the eyes of those they have killed. I have seen too many countries whose people were blinded into an exceptionalism carved out of pride for their uniqueness only to have that destroyed.’

He also touched on the past apartheid injustices and paid homage to struggle stalwarts Steve Biko, Ruth First, Nelson Mandela, Robert Sobukwe and Dulcie September and talked to the current situation in South Africa. He called on all South Africans to fight and stand against injustices such as bribery, crime and lack of quality service. ‘We fail our nation when we look the other way,’ said Gounden.

To the graduates from the College of Humanities, Gounden said: ‘For the young people graduating here today, you should know that thousands have died so that you can graduate here today… so that you can build from the ashes of apartheid a new South Africa. This is your historical responsibility.’

Gounden also expressed gratitude to his father Swami Gounden and his wife Vanessa, to the rest of his family and to his alma mater UKZN for honouring him with a Doctorate degree in Social Sciences.