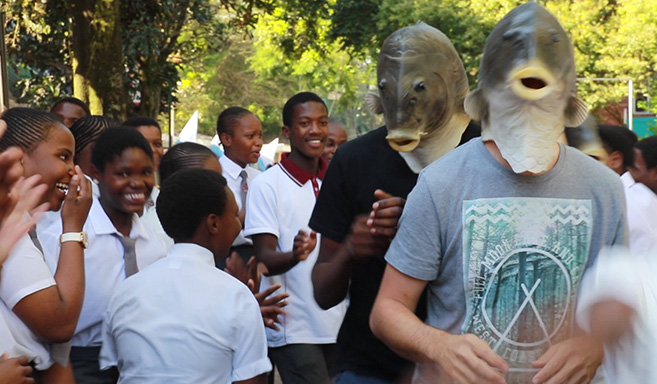 Two members of the Aquatic Ecosystems Research group don fish heads at the Royal Show in Pietermaritzburg to the amusement of high school pupils.

The Aquatic Ecosystems Research (AER) Group in the School of Life Sciences held several events to celebrate World Fish Migration Day (WFMD), including a networking function at uShaka Marine World in Durban to launch the WFMD poster, and a field day at the Umgeni River at Fountainhill Estate in Wartburg.

At UKZN’s stand at the Royal Show in Pietermaritzburg, postgraduate students and researchers donned fish head costumes to raise awareness about South Africa’s migratory fish, whose routes are often cut off by dams, pollution and disturbance to wildlife impacts.

Vital fish migration sees them moving tremendous distances with South Africa’s Sardine Run in July/August being the largest migrating shoal of fish on earth. In other instances, Sharks have entered the Kruger National Park via Mozambique, and yellowfish (an indicator animal of ecosystem health, dubbed ‘living gold’) once migrated in large numbers along the Thukela River, making the river appear like running gold.

Fish migrations, said AER lead researcher Dr Gordon O’Brien, are essential as the fish’s ability to complete their migration is part of a much larger ecosystem.

‘Ultimately, it’s not just about fish, but about people - understanding ecosystem processes demonstrates what environment does for us for free,’ said O’Brien. ‘Unfortunately, we realise these things only once they are gone or when we have to pay for services the environment once provided.’

O’Brien highlighted that the drought had placed additional stress on ecosystems already affected by excessive use.

Migratory fish, which people depend on for food, rely on human support for survival. O’Brien emphasised the need to realise the value of fish, systems and processes, and then act.

In 2015, more barriers to migrating fish were removed in North America than were built, freeing up migratory paths. Local and international scientists are working with the AER to design and build tools like ‘fishways’ and fish-friendly turbines. The group is investigating what habitats and environmental conditions fish need and how to provide these.

The group hopes to increase awareness and education about sustainable use and protection of water resources, and focus efforts with UKZN and its partners to address fisheries management, water resources management, ecological risk, behavioural ecology of fish, river and estuary health, and aquaculture.

Initiated in 2015, the AER group was officially formed in March this year boasting a membership of 13 postgraduate students. The group has developed regional scale environmental flow frameworks and an assessment tool called PROBFLO for the Nile Basin soon to be tested in the Mekong, Zambezi and Colorado River Basins

The group collaborates with colleagues from the College of Agriculture, Engineering and Science, and looks to grow, potentially establishing research facilities at Ukulinga Research Farm.