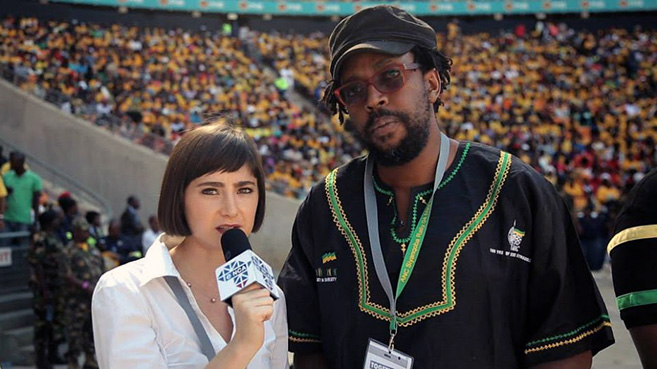 The film, which featured at this year’s Durban Film Festival (DIFF), follows two political “fixers”, Brutus (Tony Miyumbo) and Shakes (Ntosh Maadlingozi), who call the shots and “pull  strings” at the ANC’s headquarters in Braamfontein.

It took five years to complete and was described by Barker as a “labour of love”.

It tells the story of Wonder Boy (Kagiso Lediga), a charismatic young man from the Eastern Cape, who is convinced to run for president by Shakes and Brutus.

Their aim is to mould him into a great politician and manufacture his downfall at the right time, for the right price.

‘The film used available footage from various news sources and we spliced it into (in) appropriate places to add to the laughs,’ said Barker.

Added Miyumbo: ‘We made this film with no money and each person on the cast contributed their time and talent.’

Other cast members include: John Vlismas as Emeric ‘the dodgy dude with a gun’, Akin Omotoso as ‘a Nigerian on the street’, Loyiso Gola as himself and Barker as a ‘dodgy construction guy’.