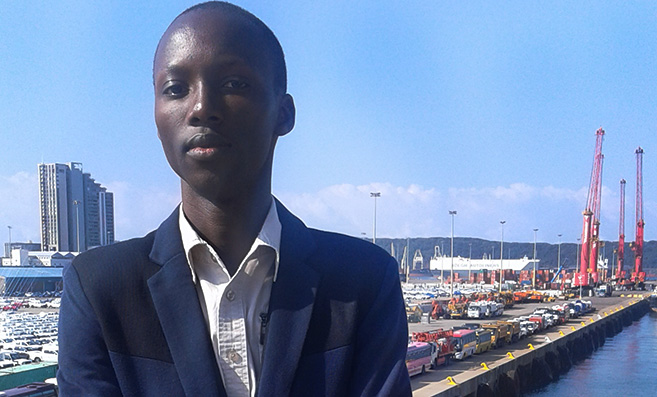 A paper contributing to the development of South Africa’s maritime sector has led to School of Accounting, Economics and Finance Development Lecturer Mr Ayanda Meyiwa’s work being accepted for publication in the upcoming issue of the Journal of Economic and Financial Sciences.

Meyiwa, who presented this paper at the recent Value2016 biennial Conference hosted by the University of Johannesburg in Limpopo, said as a developing researcher and academic he was grateful for opportunities that contributed to this growth.

‘I was the only person presenting on the maritime field and my content was news to literally everyone at the Conference. One economics professor even confessed to having learned something new,’ said Meyiwa.

‘This made me realise there is still a lot of work to be done in not only researching but also promoting South Africa as a maritime economy in academia and also the political arena. I am thus quite confident of the many exciting opportunities that await me as an emerging researcher and a Graduate School of Business and Leadership PhD candidate,’ he said.

Meyiwa will present a paper at the upcoming Management, Business, Administration and Legal Initiatives (MBALI) 2016 Conference hosted by the University of Zululand in July. The paper is based on his PhD thesis which explores various types of port governance models that can contribute toward South Africa succeeding in becoming an exemplary democratic developmental state.

Meyiwa graduated with a Master of Commerce Leadership Studies in April. His dissertation supervised by Chasomeris was titled: “Assessing Measures to Improve South Africa’s Port Doctrine: Pricing and Governance Reform”.

‘The opportunities I have with the CLMS, especially the School of Accounting Economics and Finance and the GSB&L, are enviable and the environment in which I find myself is most conducive for my growth as an academic and development as a researcher, contributing handsomely to the University’s research throughput.’