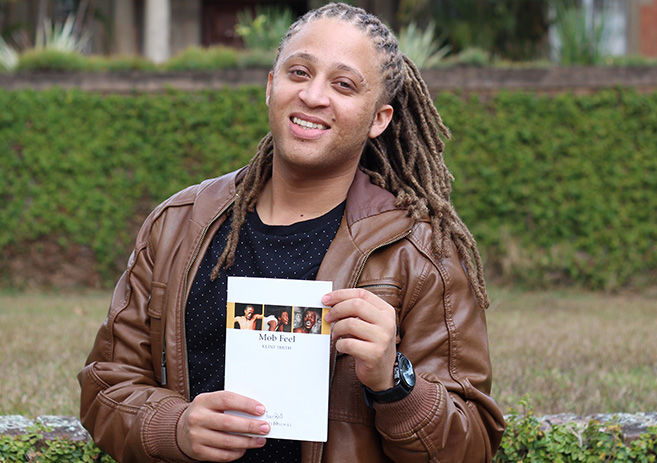 Mob Feel, a play by a master’s student and creator of UKZN’s tagline Inspiring Greatness, Mr Kline Smith, has been published by Junkets Publishers in the Junkets10 Series.

Smith says Mob Feel hauntingly foresees a reality of life as it is lived today, and reflects the broad canvas of South Africa.

‘When I first came across Can Themba’s masterpiece in 2012, I had no idea I was blowing the dust off such an important South African classic,’ said Smith. ‘I’m honoured to be playing a part in making such a beautiful, painful and poignant story accessible to performers and students both here at home and around the world.

‘The opportunity to have Mob Feel published is also a tremendous honour and I hope that the book will aid some young artist along his journey of theatre directing,’ said Smith.

Mob Feel is set in the summer of 1952 against the backdrop of an extended period of gang violence and ethnic rivalry, fuelled by mob mentality, which devastated the township of Westbury in Johannesburg.

The tragic love story is that of Linga and Mapula, and their attempt to overcome an old ethnic rivalry stained with prejudice, violence and pain. It unfolds through evocative storytelling with no elaborate props, sets, lighting, costumes and frills being used.

‘The play is simply four people with a guitar, a drum, an abundance of energy and a story that is hauntingly reminiscent of the atrocities committed recently in South Africa; most notably, the devastating xenophobic attacks that flared up in parts of the country,’ said Smith.

Smith is keen to run the show early next year together with the book launch, signing and conversation with the cast. ‘I regard myself as a UKZN ambassador and could not have done this play without the generous and consistent support from the University.’