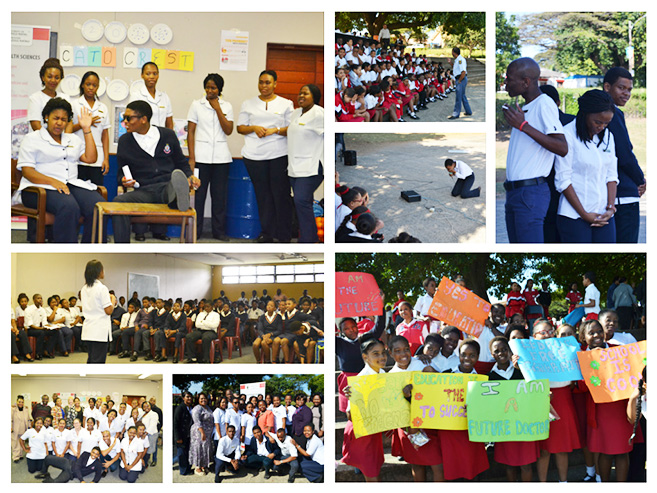 Second-year Nursing students gave a talk to more than 200 Grade 7 to Grade 9 learners from Assegai Primary in Austerville and Mayville Secondary School at Cato Crest in Durban.

The students, who presented the programmes as part of their community engagement programme, spoke about how alcohol and drug abuse could lead to risky behaviours, influencing and affecting their studies and their lives.

Students performed plays for learners with the aim of educating them about the consequences of teenage pregnancy, substance abuse, HIV and AIDS, intergenerational relationships, pollution and sexually transmitted infections (STIs).

Led by Ms Nomcebo Dlamini, students spoke to about 113 Grade 7 learners in Austerville about the pressures of being new in high school, teenage pregnancy and drug abuse.

They also discussed school dropout due to substance abuse and pregnancy. A local policeman, Warrant Ballad Reddy, gave an address on the dangers of drugs and alcohol. He also gave the children the police’s emergency number, 10111, and told them about the importance of knowing it.

Learners mentioned several street drugs available in their area, including whoonga, cocaine, tic and dagga.  ‘About 80% of people who started with cigarettes are on heroin now in this area. Cigarettes are the gateway to other drugs,’ said Reddy.

Meanwhile, in Cato Crest a group of students led by Mr Siyabonga Mkhize spoke to 150 Grade 8 and Grade 9 learners about the consequences of teenage pregnancy, substance abuse and pollution.

Colleague Ms Sthabile Mathebula told learners that teenage pregnancy increased the cycle of poverty. ‘It affects the community by causing overcrowding,’ she said.

Learners could prevent teen pregnancy by abstinence or having sex using condoms.

Students donated six drums to prevent littering on the school premises to curb the problem of pollution which is an environmental and health hazard. They also donated cleaning pads and cleaning detergents.

The students have been working in their respective communities with their facilitator, Dr Mbali Mhlongo, since January.  They started by doing community assessments in order to identify community needs and implement community intervention projects.

Educators from both schools agreed with the students’ discovery that alcohol abuse and teenage pregnancy were prevalent among children aged 13 to 16.