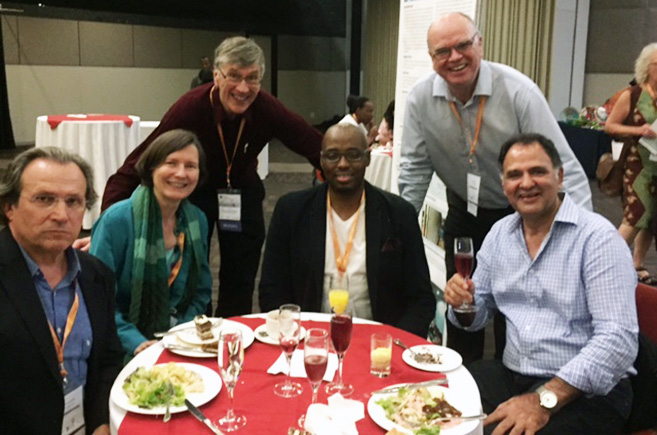 Professor Ernest Khalema, Academic Leader in the Discipline of Community Development in the School of Built Environment and Development Studies, recently presented a paper as part of an international panel at the 6th International Conference on Community Psychology at the Durban ICC.

The paper was titled: “The Ethics of Unpacking Mental Health Issues in the Research on Homelessness: Process, Methods, and Observations from a CBPAR Project in Durban, South Africa”.

Hosted by UNISA, the South African Medical Research Council, and the Psychological Society of South Africa, the Conference assembled community psychologists, and other community social scientists from South Africa and around the world along the theme, Global Dialogues on Critical Knowledge Liberation, and Community.

Khalema was part of an international panel of experts who deliberated on ways of responding to the surge of street and shelter living (homelessness).  The panel reflected on a variety of effective solutions and interventions that have been tried and tested worldwide.

In another panel session, Khalema with a research team from the Human Sciences Research Council (HSRC) led by Dr Chris Desmond, presented a symposium detailing the findings of Phase 1 (qualitative findings) of the Durban homelessness project, which Khalema led.

Funded by the Safer Cities Unit of the eThekwini Municipality under the leadership of Mr Martin Xaba and Ms Nomusa Shembe, the HSRC collaborative team recently completed Phase 2 - Homelessness Census, and is currently finalising Phase 3 - Community Consultations and Roundtables with stakeholders, to chart a way forward in policy/practice recommendations and action plans to address homelessness in the Durban CBD.