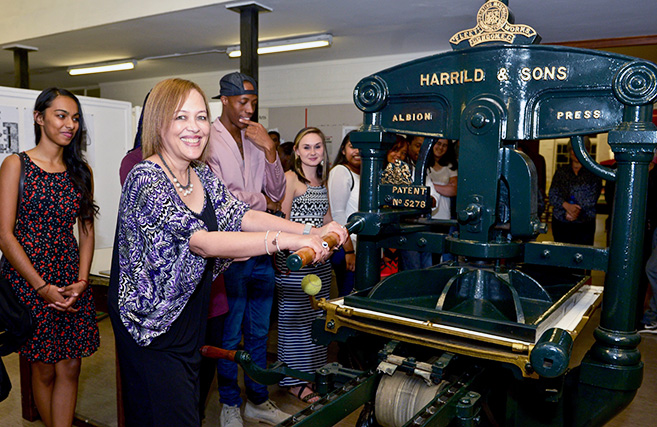 DVC and Head of the College of Humanities Professor Cheryl Potgieter recently unveiled the restored Albion printing press at the Centre for Visual Art (CVA) in Pietermaritzburg.

Through special funding made available by the College, the Centre received new equipment, such as kilns for ceramic and glass pieces as well as 20 new potters’ wheels. The grant also allowed for existing Printmaking presses and equipment to be refurbished.

After a tour of the CVA, Potgieter said, ‘I am delighted to see the output and the interest in the creative arts. The work of the CVA clearly shows that they have entered the debate on transformation, decolonisation and gender and sexuality.’

She commended the work of the CVA staff and students for their engagement with Indigenous Knowledge Systems, further encouraging them to work closely with other clusters and disciplines in collaborative engagements.

The Albion at the CVA was lovingly refurbished by Chris Morewood, who has not only got it working perfectly, but also decorated it in original period style, using dark green paint with gold trim. CVA Lecturer Dr Kathy Arbuckle noted that ‘Albion Presses are massively heavy and virtually indestructible, and the CVA’s looks very grand in the entrance to the CVA studios.’

According to CVA Director Dr Louise Hall, the Albion press provides many generations of visual arts students with the means to create their first ever linocut or woodcut relief prints.

‘It has already been used in the first semester by Level One students to produce their first prints, and senior third years, postgraduate students and staff are also enjoying putting it through its paces. Having access to equipment like this exposes CVA students to a broad range of techniques, from traditional printmaking to 3D printing technology in digital arts,’ she said.

Honours student Mr Eloff Pretorius added, ‘It was incredibly exciting and rewarding to work with the Albion Press. As students we were amazed to see our work being printed on the Albion. It’s also great that the CVA was given funding because it contributes to the production of excellent artwork and recharges the interest in the CVA and Art again.’

Speaking about the Albion Press, Hall explained, ‘The Albion press is more than a century old dating to 1902, although it is thought to have been acquired by the University in the 1970s. Albion presses were manufactured between about 1820 and 1930, and were for mainly book-printing. The printing method is known as “letterpress”, essentially the same process as that was used in the Gutenberg Press, the famous press that made the first printed copies of the Bible available to ordinary people.

The staff of the CVA, led by Senior Lecturer Dr Louise Hall, thanked the College of Humanities for recognising the importance of the visual arts at UKZN and investing in its future.