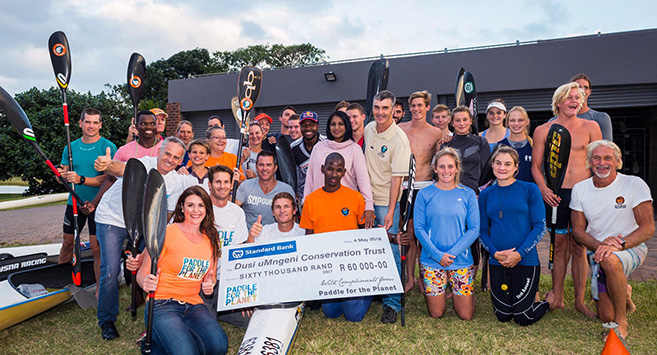 Project members celebrate the rewards of their fundraising efforts.

UKZN Academic at the Coal Face of Marine Conservation

School of Management, Information Technology and Governance academic, Dr Thea van der Westhuizen, is a member of the marine conservation initiative, Paddle for the Planet, which has raised R60 000 to introduce a project - involving booms, bins and bags - to help clean up the Umgeni River.

As the champion of the project, van der Westhuizen teamed up with UKZN’s MACE Labs (Marine Biology, Aquaculture, Conservation Education and Ecophysiology) Director, Dr Deborah Robertson-Andersson, and the Dusi Umgeni Conservation Trust (DUCT) to implement the environmental conservation initiative to remove plastic and other debris polluting rivers and the sea in South Africa.

‘Paddle for the Planet is a movement that was born in Dubai in 2011 where some paddling friends decided there was a need to create change,’ said van der Westhuizen. ‘Since then we have run numerous projects to make a difference to our marine conservation, rivers and estuaries and this is one of them. Last year, the organisation celebrated its five-year anniversary and we are looking forward to doing more for our planet.’

Robertson-Andersson, who recently delivered a presentation on the impact of microplastics on the environment, said the project could not have come at a better time as keeping our oceans and rivers clean was a priority.

‘This will also be part of a greater Community engagement project because it is important that the local people understand the threat that pollution in our rivers has on the wildlife of the region,’ said Robertson-Andersson.

‘It is great to partner with people like DUCT and Paddle for the Planet because we are all thinking along the same lines in that we are trying to protect both our fresh water and its animal life as well as the sea and the creatures that inhabit its waters.’

Durban members of Paddle for the Planet recently participated in a 25km surf ski race to show their support for the project.