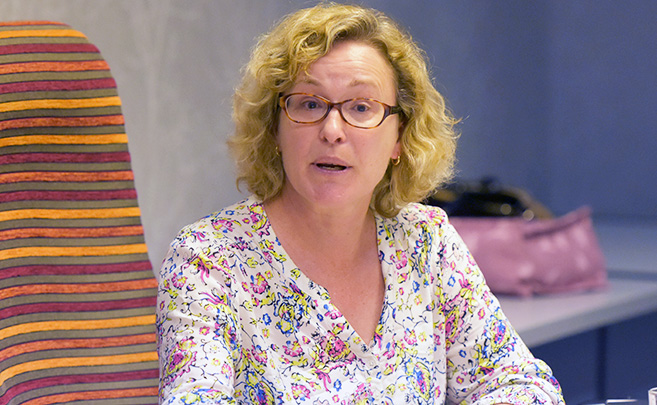 Female Headed Households a Centre of Discussion at Seminar

A seminar which explored the challenges facing women-headed households under the topic: “On their Own: Women, Urbanisation, and the Right to the City in South Africa”, was recently held on UKZN’s Howard College campus.

The Seminar, hosted by the international and Public Affairs (IPA) Cluster in collaboration with the Society of Political Science Students (SOPPS), was presented by Associate Professor in the School of Environmental Studies at Queen’s University, Ontario, Canada, Professor Allison Goebel.

During her wide spread research, Goebel worked in seven different areas in Pietermaritzburg/Msunduzi Municipality, including informal settlements, newer RDP settlement and older township areas, where she explored the experiences of women post-1994.

Overall, Goebel navigates different layers of urbanisation in South Africa and identifies the ways through which women’s experiences of urbanisation differ from those of men’s, and why these differences matter.

Among her findings, Goebel established that for low income urban Africans in South Africa, female headed households are in the majority and therefore should be considered “the norm”.

Female heads are sometimes grandmothers and great-grandmothers looking after children, but there are also younger women living with their sisters, etc.

The source of income for these households included government pensions, child and foster grants, and fees for looking after AIDS orphans.

Despite the financial challenges, Goebel said the women articulated themselves as ‘leaders’ of the family as they held important positions within those families.

Goebel said owning RDP houses gave them a sense of pride and belonging as they had a place to call home.

Because of the high rate of unemployment, she said sometimes people were forced to rent or sell their RDP houses and move back to informal settlements.

She added that some of the negatives she observed were the location, poor quality sanitation and the lack of access to proper services. Goebel said TB and HIV and AIDS were among compounding factors when it came to health issues, including long-term health problems and a lack of dental health.

Goebel says South Africa is still largely racially segregated and the country will continue to see a reproduction of these groups.

She is the author of Gender and Land Reform: The Zimbabwe Experience and her latest book is titled, On Their Own.