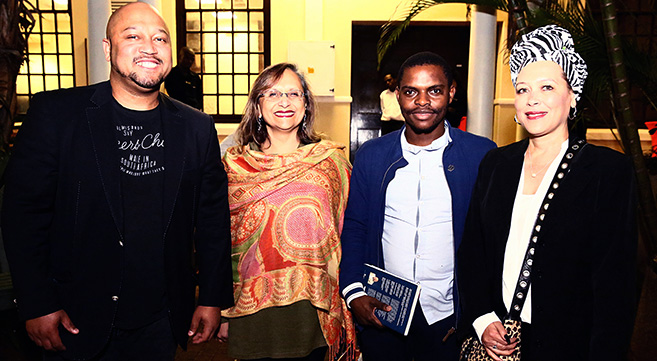 The event, hosted by the College of Humanities in collaboration with the Maurice Webb Race Relations Unit, was part of the College’s public lecture series on transformation and leadership.

Deputy Vice-Chancellor and Head of the College of Humanities, Professor Cheryl Potgieter, said speakers at the public lecture series were invited based on their ‘contribution to issues that we are engaging with, not only in Higher Education, but in society in general’.

Potgieter said the College of Humanities welcomed ‘different voices’ and would host a colloquium later in the year that addressed the issues being dealt with at the lecture series.

Delivering the keynote address, McKaiser said what needed to be decolonised when it came to the academy in South Africa was the idea of an epistemic hierarchy.

He said there was a need to call the bluff of academics and researchers for ‘keeping at bay pernicious state power and corporate power, and holding back on more humble criticism of the choices that are made.

‘There’s a pretence that academic freedom demands that one does not respond to social critique about what you are researching and teaching. And yet the irony is that all that is being role-modelled in the end is intellectual and academic viciousness. So it’s bad pedagogy to have these exclusionary choices,’ he said.

McKaiser also examined the research and teaching obligations of South African academics. ‘I think we have fallen short of those under the pretext of academic freedom.

‘Freedom is what we fought for when we chose a liberal democratic society in 1994. But we have this weird belief as academics and researchers that the hallmark of academic freedom is that you should be completely unencumbered in the choices you make about what to research and what to teach. I think that is absolute rubbish!’

Holder of a World Master’s Debate title, McKaiser gave his perspective on transformation and juxtaposed it with decolonisation.

‘For me, decolonisation, which we have been gifted by young South Africans, is a term that is preferable to transformation which speaks to a polite politics in which you make incremental changes,’ he said.

He emphasised that transformation was linked to justice and inclusivity, including in the corporate environment, schools and universities. ‘Transformation has got to aim at inclusivity. That means that spaces in our society that have “exclusionary practices”, that have institutional cultures that are incredibly odious, and don’t speak to the realities and the biographies of all the girls and boys that go to that school, are unjust.’

McKaiser thanked Potgieter and the Maurice Webb Race Relations Unit for inviting him to participate in the discussions.

PhD Candidate and researcher with the Maurice Webb Relations Unit, Mr Lukhona Mnguni, said institutions of higher learning were navigating uncharted waters. ‘Doomsayers have declared the death of universities in South Africa. Overzealous proponents of decoloniality have declared an end to dialogue. Sceptics are of the view that we talk too much – and before we know it, the agitation for decolonisation will lose steam before it has realised its goals,’ said Mnguni.

The SRC President at Howard College, Mr Bandile Majola, said the lecture series had created a platform which allowed students to engage in robust discussion which played an integral role in raising the consciousness of students.

College Dean of Teaching and Learning, Professor Nobuhle Hlongwa, delivered the vote of thanks, while Potgieter acknowledged the SRC, College PR Manager Ms Xoliswa Zulu, and Mr Lukhona Mnguni for contributing to the success of the lecture.