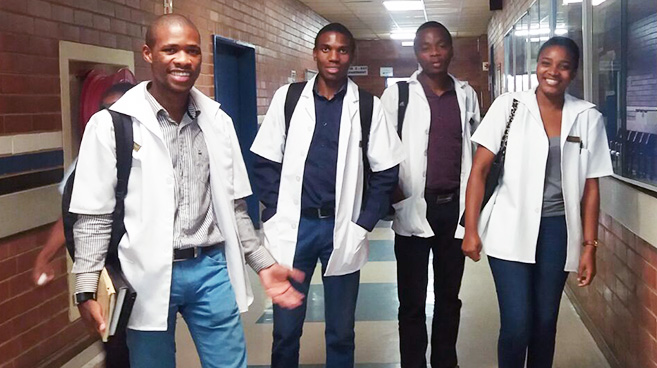 The College of Health Sciences (CHS) has allocated R32 million towards postgraduate bursaries this year.

CHS, a multi-professional College spread across four of the five UKZN campuses, is a recognised centre of excellence in health professional education, research, and community programmes.

This College is not only focused on giving students high quality health education, it also assists financially, ensuring that students who come from less privileged backgrounds are given an opportunity to further their education and make something of themselves. All of this is dependent on a student’s progress and an adequate budget.

PhD in Public Health student, Ms Nonzwakazi Ntombela, is one of many CHS scholarship recipients. ‘I heard about the scholarship through Professor Chimbari’s talks and later asked for an application form from my department.’

Fourth year Medical student Mr Bahle Tshoba, whose parents have both died, said: ‘I think medicine chose me because from primary school there’s nothing I ever wanted to do besides medicine.’  Tshoba passed his matric in 2012 with seven distinctions through the Inanda Newtown Comprehensive High School.

‘I never paid school fees; I don’t think my teachers wanted to lose an A- student,’ said Tshoba.

After matric Tshoba was faced with the problem of not being able to pay for his tertiary education.

His neighbour helped him apply for the Gagasi FM tuition award of R8 000, while The Daily News published an article about his heart-breaking situation which led to him receiving a call from former UKZN Vice-Chancellor and Principal, Professor Malegapuru Makgoba, who approached the CHS to award Tshoba funding.

‘I always strive for academic excellence, I wouldn’t call myself a perfectionist but I do the best I can,’ says Tshoba.