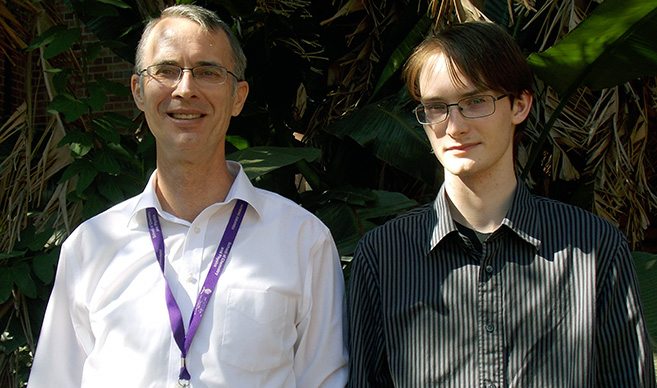 Visiting Fulbright Scholar Sharing his Expertise at School of Chemistry

The School of Chemistry and Physics at UKZN is hosting visiting Fulbright Scholar, Professor Michael Ashby, on an eight-month teaching and curriculum development visit.

Ashby, the David Ross Boyd Professor at the University of Oklahoma in the United States, is with his son Mathew, who is studying post-apartheid South African politics and the history of KwaZulu-Natal.

Ashby, who is teaching at third year and Honours levels, also gave a seminar on the topic of Advancing Graduate Education in the Chemical Sciences, on both the Pietermaritzburg and Westville campuses.

He also ran a workshop on ‘grantsmanship’ for members of staff in Chemistry, and has organised meetings among staff to discuss curriculum development in Chemistry and Physics, a topic on which he has considerable experience.

Ashby is heavily involved in curriculum development and assessment in STEM areas in the United States, especially at masters and PhD level. He is especially interested in developing professional (or ‘soft’) skills in science curricula.

Ashby has contributed to the School on a social level, inviting groups of students to his apartment regularly for pizza evenings and get-togethers, building rapport and cohesion in the group.

Ashby, who linked up with UKZN through his former PhD student, Dr Bheki Xulu, conducts research focused on human defense factors, small molecules that are used by the innate defense mechanism.

‘These molecules are largely responsible for the antimicrobial properties of saliva, breast milk, and other bodily fluids,’ explained Ashby. ‘The chemical species are non-antibiotic antimicrobials, and as such are not subject to antibiotic resistance.’

Ashby is working with Xulu on the development of projects for his own, independent research in this field.

Ashby hopes that his visit will have a lasting impact on the School, and aims to continue discussions of curriculum reform after his return to the United States.