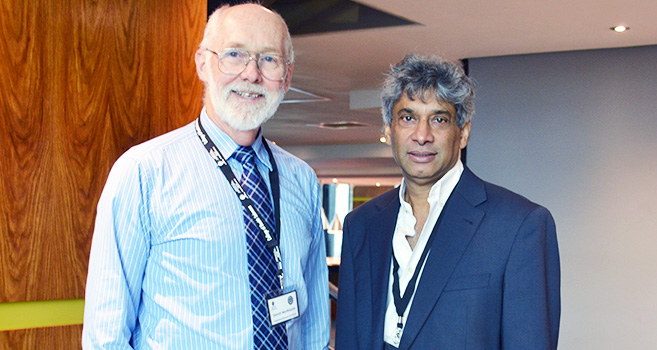 The Conference was part of a grant-funded project to build up research capacities of psychologists and other related fields to do high quality published research in forgiveness, specifically in South Africa.

The Conference thus aimed to introduce South African forgiveness researchers - who were selected for this competitive programme - to each other and to assist them to form research teams that will work together on different projects.

Many substantive talks helped the researchers develop knowledge of existing forgiveness research in South Africa (and elsewhere in Africa) and research skills including qualitative and quantitative methods of research and data analysis.

In his welcome address, Department of Behavioral Medicine HoD, Professor Basil Pillay, said there was a need for both research and clinical concern.

‘Research will help heal the nation and also rid society of the cycle of violence. Clinical concern will help fight trauma and its implications,’ he said.

The project organisers said the idea was to help people who want to do research on forgiveness in South Africa build a knowledge base and experience publishing journal articles in psychology and related fields.

‘My life’s mission is to do all that I can to promote forgiveness in every willing heart, home and homeland,’ said one of the project organisers and the main speaker, Professor of Psychology at the Virginia Commonwealth University (VCU) in the United States, Professor Everett Worthington.

Worthington specialises in forgiveness research and reconciliation. ‘This started when I had this idea, then I received funding to develop it,’ he said.

Earlier this year, he initiated a conference in Ghana attended by delegates from the host country, Nigeria, and Cameroon. That Conference was organised by Dr Annabella Osei-Tutu, a Lecturer at the University of Ghana, who also attended and presented at the Conference in South Africa.

Worthington said his focus included both West Africa and South Africa.  ‘The project hopes to help researchers to get to know each other and form research projects in teams,’ he explained.

He hopes the groups will plan and conduct research projects that they will work on together while building and gaining knowledge and skills.  One of the goals is to take the project to East Africa.

South African Regional Director, Mr Richard Cowden, said the Conference was about getting 15 emerging academics from all over the country to come together and collaborate on forgiveness research progress.

‘The purpose of the Conference is to develop several research projects focused on South Africa.’

The South African inaugural Conference was attended by academics from different South African universities, government stakeholders and private psychology practitioners. In January, they hope to convene a conference in Ghana that will include researchers from both South Africa and West Africa, and it will hopefully lead to collaborative research on forgiveness across countries.

Worthington is a licensed Clinical Psychologist in Virginia. He has published over 35 books and about 400 articles and scholarly chapters, mostly on forgiveness, marriage, family topics and religion and spirituality.

He became interested in forgiveness through his practice in couple counseling, and he began conducting research on forgiveness.

He is married to Kirby, a child development and parenting specialist and they have four children.