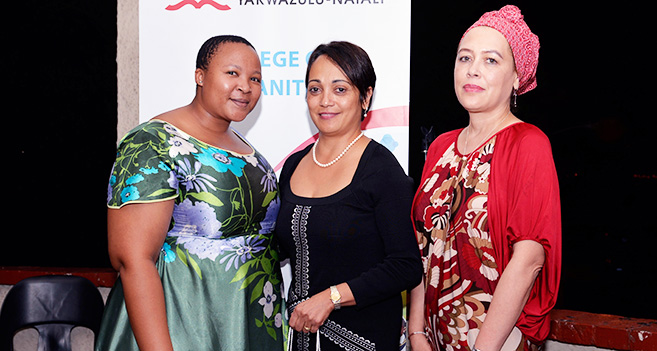 As part of the successful College of Humanities Transformation and Leadership Public Lecture Series, the highly anticipated new book Swimming Upstream: A Story of Grit and Determination to Succeed by Professor Shirley Zinn, was recently launched in partnership with Adams Books.

The launch, which was in the form of a lecture, elicited much engagement with the audience with many describing Zinn’s story as one of truth and honesty.

Her autobiography talks about one’s determination, courage and triumph over incredible adversity, showcasing how Zinn relentlessly pursued her own goals and forged an impressive academic career even when she faced significant odds.

Zinn grew up with struggling parents under unsafe and difficult conditions in Steenberg which is known for gangsterism, alcoholism and teenage pregnancy. With encouragement from her parents and South Peninsula High School matric teachers Brian Isaacs and Riyaadh Najaar, she was determined to succeed, going on to study post matric at the University of the Western Cape.

Some of the major challenges she had to overcome included losing her only child Jamie in a car accident when he was seven years old and almost giving up her Harvard studies because she could not afford it.

Zinn is now conquering the business world and expressed gratitude to her husband Kevin and her parents for their support and encouragement while also dedicating the book to Jamie. ‘I honour my son each day by being a mentor, a voice for success and a tool for the youth to grow and be more,’ she said.

Zinn’s advice is to never give up, to always be resilient, to persevere and to recognise the power of education as a tool for success.

Humanitarian, peacemaker and recently UKZN honorary doctoral recipient, Dr Vasu Gounden and Professor Jerry Coovadia raised questions of how and why adversity could be considered a gift and how corporates can aid in social cohesion with Gounden stating, ‘I really enjoyed the talk by Shirley. As she recounted the tragedies she had to overcome to succeed, a part of her talk that impacted me was her statement to see adversity as a gift. Shirley is proof that you shouldn’t give up hope even when faced with adversity.’

The book is available at Exclusive Books and CNA at R279 a copy.