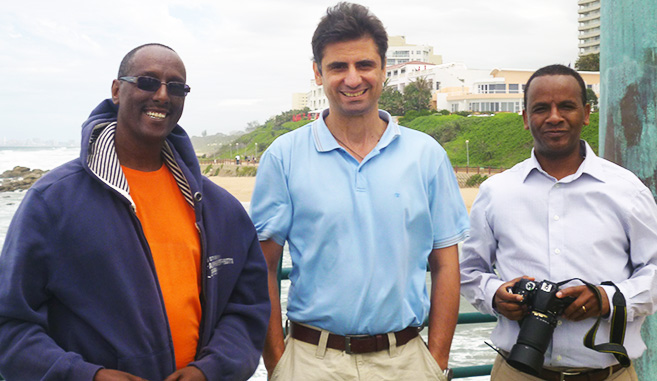 Physics researchers (from left) Professor Genene T Mola and Dr Giuseppe Pellicane, both of UKZN, and Professor Mesfin Tsige of the University of Akron.

Work - titled “Surface Enrichment Driven by Polymer Topology” - by a team of researchers in UKZN’s School of Chemistry and Physics has been published in the American Physical Society’s Physical Review, denoting its significance to the scientific community working in the fields of polymer and biological physics.

Dr Giuseppe Pellicane, Professor Genene T. Mola and their PhD student, Ms Mireille Megnidio-Tchoukouegno, who led the research, collaborated with the University of Akron in Ohio, home to the research centre with the largest programme in polymer science in the United States.

The research is concentrated on polymeric materials. Polymers are molecules with a repeated, chain-like structure which have many applications, from use in plastic materials to organic solar cells.

The research team provided a microscopic understanding of the role of molecule geometry in determining the surface absorption of a specific polymer species.

This result was unexpected because a well-known theory of polymer physics indicates cyclic chains should be preferentially absorbed at the surface regardless of the polymer length.

The prospect of being able to control the surface properties of polymeric materials by blending polymers of different shapes is a new research direction. Understanding the microscopic factors which drive the surface segregation is crucial for many industrial applications in coatings, adhesives, membranes, and biomedical engineering.