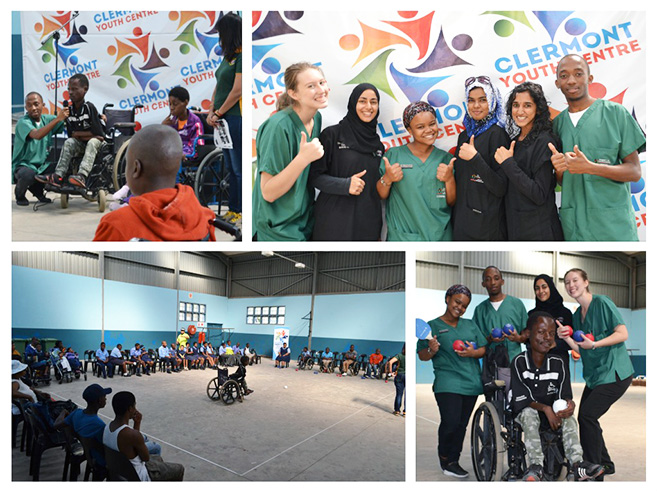 An exciting new sport has been introduced to disabled persons living in Clermont and the neighbouring KwaDabeka Township, thanks to UKZN students in partnership with the Clermont Youth Centre, Victory Homes and RP Moodley School for children with special needs.

Magwaza was diagnosed with muscular dystrophy – a group of more than 30 genetic diseases characterized by progressive weakness and degeneration of the skeletal muscles that control movement – and has been using a wheelchair from childhood. His life changed for the better in 2004 when he started playing the paralympic game, boccia, during his schooling at RP Moodley School.

‘Boccia is a game of strategy and accuracy that was originally designed to be played by people with cerebral palsy. Now, the sport includes athletes with impairments that affect motor skills. The sport is played on a flat, smooth surface, where players must throw or roll coloured balls as close as possible to a white target ball, known as the “jack.” The player, pair or team with the most balls near the jack is the winner (https://www.paralympic.org/boccia),’ the school’s SLP and national convener of boccia, Mrs Nishla Maharaj explained.

Maharaj spoke at the Boccia Sports Awareness Day held successfully at the Clermont Sports Hall, honouring Magwaza’s wish to start a local team to play and compete in the sport.

In 2006 Magwaza was part of the South African team in 10th place out of 52 countries at the international boccia championship held in Brazil. They were in 12th position when the same competition was held in Canada.

‘People with disabilities should also lead a meaningful life,’ said Magwaza, orphaned with two sisters and a brother that is earning minimum wage and with his primary support as the government grant. He said boccia was a unisex sport that can be played by all age groups, and so his dream was to start a sustainable local team.

‘We really had a good time playing boccia. It was a great experience,’ said Mduduzi Shabane (29), also from KwaDabeka on the Sports Awareness Day.

Physically challenged individuals and their caregivers flocked to the hall where much fun, laughter and games were enjoyed. The students printed flyers and posters which ensured that the day was a success.

The narrow, topsy-turvy streets driving to pick up some of the day’s attendees in KwaDabeka revealed the extreme challenges they face traveling to the clinic and merely having a social life.

The day was also aimed at advocacy and disability awareness, said OT students Ilhaam Hoosen, Kwenzile Jiyane, Phile Sibiya and Michaela Raw. Each said that they are naturally compelled to help other people, and so they studied OT at UKZN. Their parents and individual life stories made them compassionate about humanity.

The SLP students collaborating in the project were Thashni Govender and Raeesa Kader.