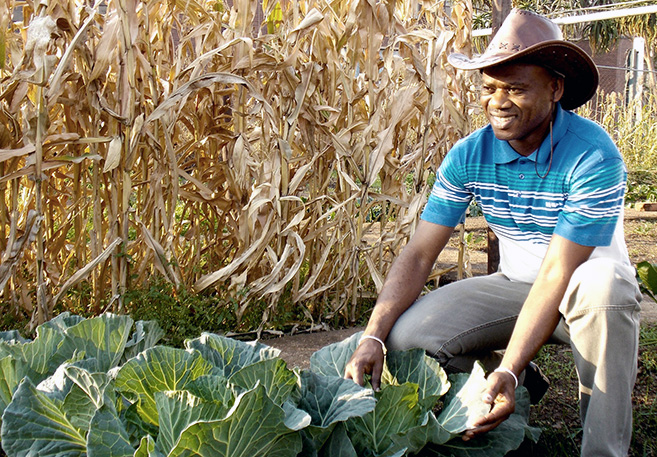 A Distinguished Teacher and a Dean

Dean and Head of the School of the Agricultural, Earth and Environmental Sciences (SAEES), Professor Albert Thembinkosi Modi, received a Distinguished Teachers' Award for 2015 – only the second UKZN Dean to have received the honour!

Nominated by students, Modi is able to balance the responsibilities of his role with his passion for teaching. The award is conferred for outstanding teaching demonstrating effective learning outcomes, community engagement, curriculum development, and the translation of practice into scholarship.

Modi is a Crop Scientist, championing sustainable agriculture and the value of indigenous knowledge in informing scientific research. A graduate of the University of Fort Hare, he received his Master’s from the then University of Natal and was a Fulbright Scholar at Ohio State University in the United States for his PhD. Before joining the University of Natal in 1996, he was provincial agronomist for PHI-Hibred International.

Modi said receiving the award was encouragement to continue leading by example. He makes time for students during and outside of lectures, guiding them graciously without patronising them as they encounter challenging concepts.

He takes an interest in the lives of struggling students to give them special academic advice and direct them to counselling.

His positive approach is informed by his belief that people have the unique ability to take command of and shape their destinies, a philosophy that helps him place confidence in his students’ capabilities.

He has led numerous research projects, and helped establish the Ezemvelo Farmers Organisation and the Moses Kotane Institute for Science and Technology. He is a Senior Fellow of GreenMatter, Honorary Fellow of the Mangosuthu University of Technology, and Chairman of the South African Agricultural and Life Sciences Deans Association (SAALSDA).

Modi has published more than 70 peer-reviewed journal publications, conference proceedings and book chapters, as well as popular science articles. He has supervised 10 PhDs and more than 30 Master’s graduates.