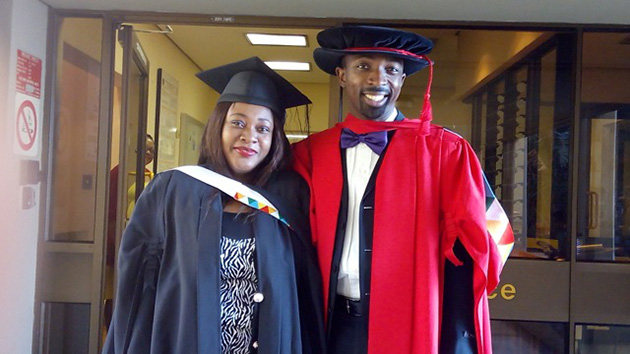 A Nigerian couple, Dr Adeola Shobo and his wife, Christiana, completed cutting-edge research during their postgraduate studies at UKZN.

Adeola, a Chartered Chemist of the Institute of Chartered Chemists of Nigeria, moved to South Africa with his wife after being accepted to read for his PhD at UKZN’s Catalysis and Peptide Research Unit (CPRU) headed by Govender.

‘The study has further given insight to reasons why some pulmonary TB drugs might not be effective for the treatment of this form of extrapulmonary TB,’ said Adeola. ‘While other imaging techniques rely on radiolabeling of the drug, mass spectrometry imaging (MSI) is a label free approach that does not modify the structure of the parent drug for purpose of imaging.’

Currently collaborating with Govender and Professor Gert Kruger on a strategy for nano-formulation of TB drugs and appropriate route of administration, the recently appointed post-doctoral fellow has heightened awareness in Africa of the MSI technique, and further proves the need for the duo techniques to be complementary tools in drug distribution studies.

Christiana said the increasing incidence of antibiotic resistant bacteria which causes intestinal infections, Campylobacter spp, was a major challenge in developed and developing countries. ‘Although it generally causes self-limiting gastro-enteritis in humans, antibiotic interventions are required in children, the elderly, pregnant and immunocompromised people.’

Her study found evidence of increasing resistance to antibiotics used for the empirical treatment of campylobacteriosis when she investigated clinical isolates of Campylobacter spp. from a private clinical laboratory in KwaZulu-Natal. This suggested that susceptibility-informed antibiotic therapy and vigorous surveillance must be established to decrease the incidence and spread of antibiotic- resistant Campylobacter spp.

‘My family is “super-excited”,’ said Adeola. ‘My mother said there had been joy in her heart since the completion of the degree, while my wife and son act as if the doctoral degree is theirs.’