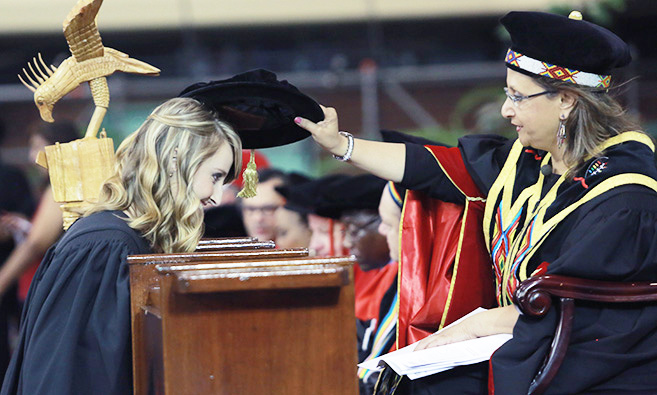 Among her many achievements are being awarded Colours for Academics and Dramatic Arts at Durban Girls’ College, being invited to become a member of the Golden Key International Honour Society at UKZN, and receiving Dean’s Commendations for every semester throughout her studies.

Lister scooped the SASLHA Prize and Susan M Swart Award for the Best Final Year Student for her outstanding academic performance as well as the South African Association for Audiologists’ award for Best Student in Practical Audiology.

‘It was overwhelming to be told that I was the top student in my Discipline. I feel incredibly overjoyed to know that all the hard work over these four years has paid off.’

‘My family were very supporting during my degree. I could not have got through the four years without my supportive parents and loving husband. Needless to say, they are thrilled for me and are very proud of my hard work.’

Lister says she has always been interested in health care and helping people so that passion, combined with her interest in Deaf culture, made studying Audiology at UKZN an obvious choice.  ‘I was lucky enough to be among very intelligent and talented individuals in my class, who worked just as hard as I did, so I was surprised about this achievement,’ she said.

An event that stood out during her studies was Deaf Awareness Day which their fourth-year class hosted in 2015. ‘It was a fun day involving a talent show, planting a tree, dancing and lots of fun and games. The day was aimed at recognising the Deaf culture and raising awareness about it.’

She is also passionate about singing and has been receiving vocal training for 10 years.

Currently completing a year of community service at Phoenix Assessment and Therapy Centre, Lister said she feels the future holds many opportunities - ‘the most exciting one being a charity organisation, Hear is Hope, which aims to raise funds for hearing impaired individuals who cannot afford hearing aids. I am hoping to take this further to help a wider population’.

Grateful to God, Lister advised younger students to keep their eyes on the end goal and see everything in perspective. ‘There are so many things during your studies and in life in general that can seem like the end of the world, but turn out to be valuable lessons that will stand you in good stead later in life. Learn from your mistakes, consistently work hard and it will all be worth it,’ she said.