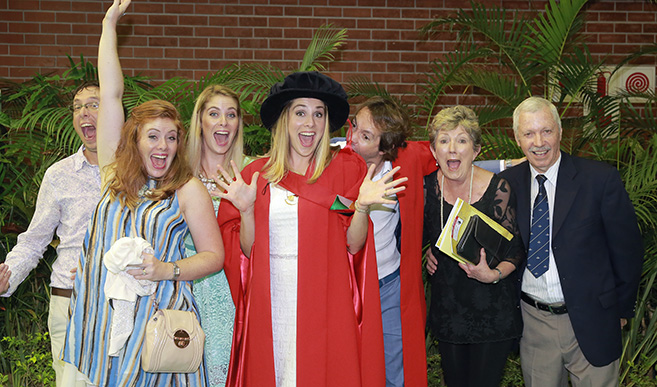 Lauren Hoyer’s family were her most enthusiastic supporters when she gained a PhD in Geology.

Dr Lauren Hoyer graduated with her PhD in Geology after her Master’s degree research was upgraded.

Her thesis was titled: “Rock Fabric of Karoo Dolerite Sills along the KwaZulu-Natal North Coast, South Africa: Implications for the Magma Source”.

Hoyer currently teaches Structural Geology at UKZN, where she completed her undergraduate and honours studies.

She described the institution as being the ideal environment for her academic growth, thanks to its proximity to her research field area. Having started her master’s studies in 2010, her project grew to a much larger study than originally envisioned, allowing Hoyer to expand her work to a doctoral study with better-defined constraints.

For her PhD, Hoyer investigated the origin of basaltic melts in the form of horizontal intrusions (sills) that intrude into rocks along the KwaZulu-Natal North Coast. By analysing these structures, Hoyer concluded that there were two distinct generations of sills that formed by different intrusive mechanisms, with the intruding magmas possibly originating from separate mantle-melting geological events.

Hoyer’s fascination with earth sciences began in the stars, her early love of astronomy leading her to look for a more tangible science closer to home. This led her to Geology, which has taught her how the solar system formed, the dynamics of the planets and the constant geological processes occurring on Earth.

A passion for academia has been instilled in Hoyer, who hopes to attain a full-time position at a South African university. Interaction with eager students, who she advises to work hard and cultivate a hunger for knowledge, is one of the highlights of working in tertiary education for Hoyer.

Hoyer credited her husband, also a Geologist, for his invaluable support and understanding in the pursuit of her PhD.