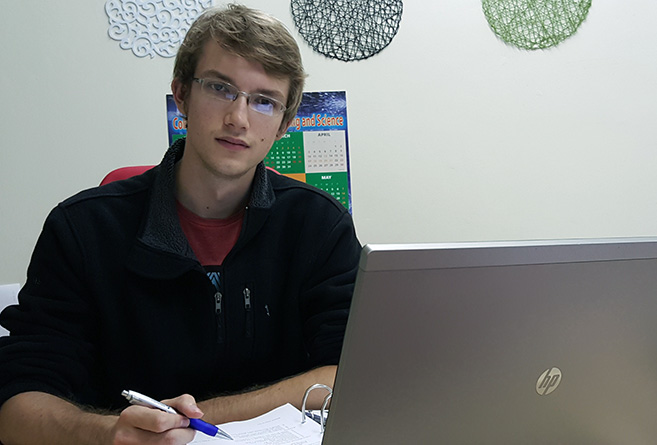 Obsession with Gaming Led to Passion for Computers

From the age of five when his father walked in with an old computer, Mr Andrew Clark has been obsessed with games and intrigued by how they were made. That fascination with things electronic paid big dividends.

‘After my undergraduate years, I felt I had only received the basics needed to survive in the real world. I heard that in Honours you could learn about more cutting-edge principles and even contribute somewhat to the field,’ said Clark.

Clark’s Honours research focused on a practical method for real-time static gesture recognition for virtual reality environments. In simpler terms, his research focused on allowing a person wearing a virtual reality headset (example the Oculus Rift), to use their hands to interact with the world around them. ‘This provides a much more intuitive means to interact with objects, as opposed to using a keyboard and mouse,’ said Clark.

Clark used a camera known as the Leap Motion Controller to capture key features about the user’s hands and using this data he had to make the computer recognise which particular gesture (i.e. a wave or thumbs up) was being made by the user.

To make the computer recognise a gesture, he needed to use an algorithm that was both fast and simple, so that the user would not be able to perceive any delay when they were making gestures. He then decided to use the K-Nearest-Neighbour algorithm to do this, as it fitted the requirements.

The outcome was a gesture recognition accuracy of 87.5%, and the classification process was so quick that it ran from start to finish in 0.057ms on average.  ‘A major part of this project was to create an interactive virtual world that users could control using gestures,’ he said. ‘The world in question placed the user in space, and they could use gestures to view data (such as temperature and luminosity) about the stars surrounding them. They could rotate the stars around, pull them in, push them away and rearrange them using gestures only.

‘My honours studies in Computer Science can only be summed up as exciting and eye-opening,’ he said.

Clark is now registered for a Master’s in Computer Science degree at UKZN during which he will expand his Honours research using several different combinations of algorithms to see which perform well in a given environment.   Clark’s outlook for mankind is succinct: ‘Virtual reality is the future!’

Senior Lecturer in the School of Mathematics, Statistics and Computer Science, Dr Deshen Moodley, who supervised Clark’s Honours research, commented: ‘Andrew is one of the brightest students I have taught and supervised.  He has a passion for learning about 3D virtual reality environments and has followed through via his master’s research which is now on the brink of developing new technologies and solutions in this exciting area.’