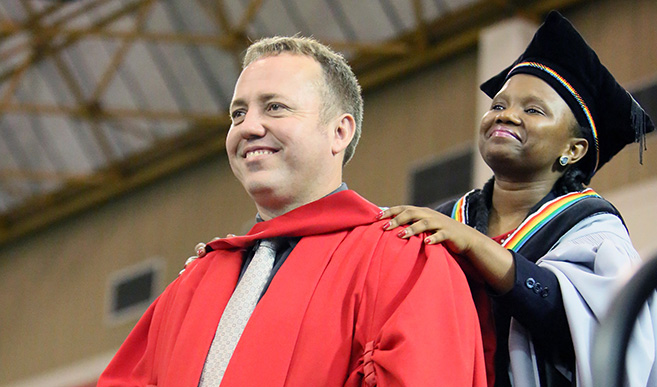 Dr Jaco Gericke graduated with a PhD in Bioresources Engineering.

Accurate assessments improve the estimation of catchment response times required for flood estimation, thus improving essential input for the design of hydraulic structures such as dams, culverts and drainage systems.

An important aspect of estimating floods is the accurate estimation of catchment response times. The development of methods to do this has been constrained by limitations of adequate rainfall and runoff data, particularly in larger catchment areas. This has implications for the efficient design of hydraulic structures.

‘This approach will enable more accurate estimates of catchment response times, both in South Africa and internationally, resulting in a more efficient design of hydraulic structures.’

Gericke’s work was described by one examiner as a ‘high quality and relevant piece of work of international standing’.

He was able to show extreme dedication to his studies whilst maintaining a balance between work responsibilities, family life and research.

Gericke is currently lecturing at the Central University of Technology (CUT) in the Free State where he is applying his 18 years of academic and professional experience in flood hydrology, water resources management and irrigation.

He is representing CUT’s Department of Civil Engineering at the Water Research Commission (WRC) and the South African National Committee of Large Dams (SANCOLD), to contribute towards the implementation of a National Flood Studies Programme (NFSP).

Gericke acknowledged CUT, the National Research Foundation and UKZN for funding his studies.  He also expressed gratitude to his supervisor for his guidance, to his reviewers, and to his family and colleagues for their support.