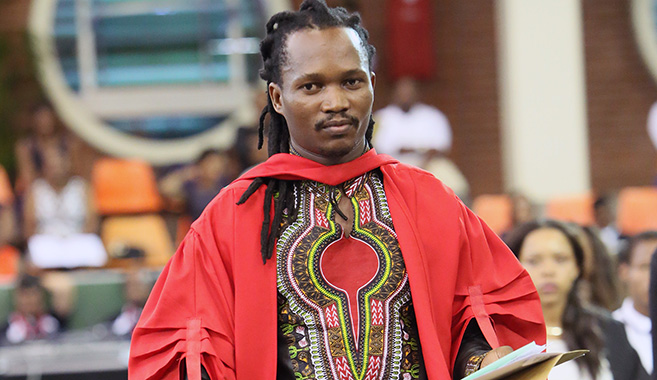 ‘I have no words to describe the feeling,’ said Mkhize. ‘I am more than excited. I feel I can stand on top of a mountain and just sing that I made it at last.’

Reflecting on his support system, he said: ‘My father is a very supportive man. On my first graduation, after seeing other people wearing red gowns, I told him I would wear that gown one day. He has since been pushing me to graduate with my PhD. Even when I felt like dropping out and looking for jobs because I needed money, he reminded me about wearing the red gown.’

Mkhize’s research investigated the presence of traditional police cultures - solidarity, cynicism and isolation - among experienced police officers. ‘Police culture is perceived to have an impact on the behaviour of the police officials which affects the manner in which they conduct themselves. Community policing was developed as a new strategy to bring effectiveness in policing by working with the public,’ he said.

The findings of the study revealed that SAPS functional police officials with 10, 20, and 30 years’ SAPS organisational experience, had attitudes in support of police culture themes of solidarity, isolation, and cynicism.

The study also found that functional police officials with 10 years’ SAPS organisational experience, believe their vocation, enacted in a dangerous and uncertain environment, is highly skilled and morally purposed, and can only be performed by unique individuals.

Mkhize hopes his research will aid the SAPS as an organisation to be able to understand the impact of police culture in policing and assist in making certain amendments.

He had this advice for fellow researchers: ‘It is possible to finish in record time, however, you need to focus and work hard. It’s important to believe in your supervisors as they are there to guide you. Consult them, be respectful and be sure you understand what is expected from you in order to finish your MA/PhD.’

Mkhize plans to do postdoctoral research, become a senior lecturer and publish as many articles as possible before joining the professoriate of the University.