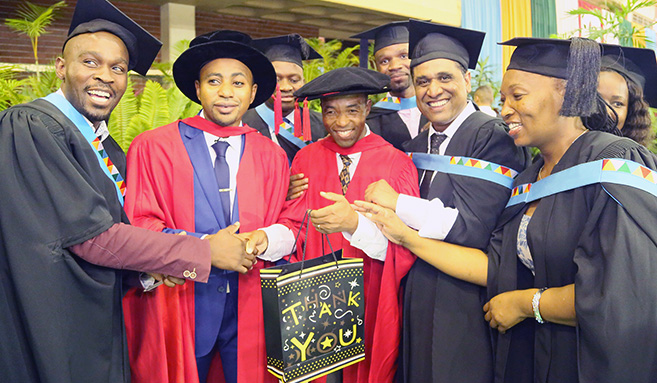 Ten excited education students, supervised by Dr Simon Khoza, graduated from UKZN, nine with master’s degrees and the other with a PhD.

‘Since the potential of literature to not only influence but change the course of society is unquestionable, and since inherent in literature is all other learning areas or subjects ranging from nuclear physics to agriculture or any other course of study in the educational milieu, engagement with literature should be at a higher magnitude theorised by experts who do not only understand the intricacies of the field but also its power to shift the landscape,’ he said.

Findings show that the teachers have an above adequate understanding of relevant concepts related to the teaching of Life Sciences, these being the Nature of Science (NOS) and IKS, which manifests in them having positive attitudes towards IKS which however, do not translate well in their classroom practice.

Dr Khoza said: ‘It is always difficult to supervise students because supervision like teaching, needs different approaches that are relevant to what the students use in their learning to influence their research projects. My experience of supervising 40 MED/PhD students to completion indicates that what informs my students’ performance is their individual reasons for doing their studies. They have been influenced by personal (habits), social (opinions) and professional (facts) reasons.

‘When the students are influenced by the personal reason which is influenced by their habitual experience (accumulated in their previous years), I remind or force them to concentrate on what they do. When they are influenced by the social reason which is about what other people say around them (opinions), I remind them that writing a thesis is a lonely journey. When they become too professional in doing their studies and start to question everything around them, I remind them to be aware of other people around them who may be affected by their actions (especially their families). As a result, I start by training my students to understand these reasons before we start our journey,’ he said.

Dr Khoza continued, ‘Therefore, I only supervise students when I understand their reasons for conducting their studies. In fact, understanding these three reasons has influenced my life activities. I used the same reasons to produce the best Ballroom dance couples in South Africa. One of the couples, Thabo Khoza and Tina Dolwana, have represented UKZN and South Africa.

‘It looks like 2015 was my good year because over and above the 10 students with their positive evaluation report on my performance, I also published six peer-reviewed articles and supervised two B.Ed Honours students to completion which gives me a record of 13 B.Ed Honours students who graduated under my supervision.’

Khoza also acknowledged Professor Thabo Msibi for taking on Curriculum Studies discipline leadership when he needed someone to help in 2014 as he wanted to concentrate on the supervision and teaching that had produced such excellent results.