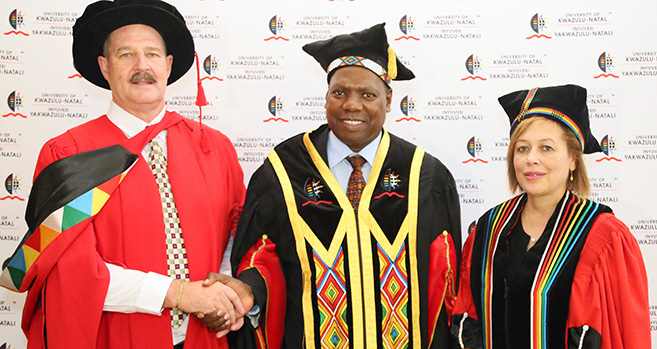 The stern but friendly policeman said: ‘Graduating with my PhD makes me feel that I can achieve so much more, especially in the area of implementing my research results,’ he said.

Husselmann’s studies involved learning more about how to effectively manage people at work. ‘Because I am a civil servant in a Government Department and our main objective is to serve our communities, I needed to find a solution to change the mind-set of our government officials about contributing on a voluntary basis to the goals and objectives of our diversified organisation.

‘This included taking responsibility and being accountable. Government departments, including the police, do not have access to unlimited funds and must use vehicle fuel and oil in an accountable and responsible manner to optimally execute their duties as mandated by the Constitution of the Republic of South Africa,’ he said.

His study produced groundbreaking knowledge useful to the police occupational and organisational environments, within the context of New Public Management theory and the broader science of Criminology.

The study, conducted among a representative sample of station commanders in the SAPS, explored, described and explained the phenomenon of ‘employee public-private fused care’ in furthering effective and efficient management of national police vehicle fleet fuel resources. The findings of the study provide a world first national comparative reference.

‘The mere fact that such a study has never been conducted around the globe, required innovative thinking and the management of mountains of uncertainty and frustration. To get hold of any SAPS station commander, by nature of their work, is difficult, by any measure, but obtaining a representative sample of all station commanders across the Republic, is another ball-game entirely,’ said Husselmann.

‘Being a major-general in the SAPS, managing a family, and completing a PhD at the same time, is no easy feat. It tested my endurance and resilience, to the point of breaking.’

He hopes his research will help improve the effective and efficient management of state resources through ‘employee public-private fused care’.

Husselmann thanked his family, friends and supervisor. ‘My family and friends gave me space, which in turn allowed me to balance my time more effectively and efficiently.’ His future plans include assisting and continuing to create an inclusive environment within the SAPS that is beneficial to everyone.

He had this advice for other students: ‘God has given you two ears and one mouth, this means you should listen twice as much as you speak, and the words you speak should be factually correct or don’t speak. Everything is possible with God.’