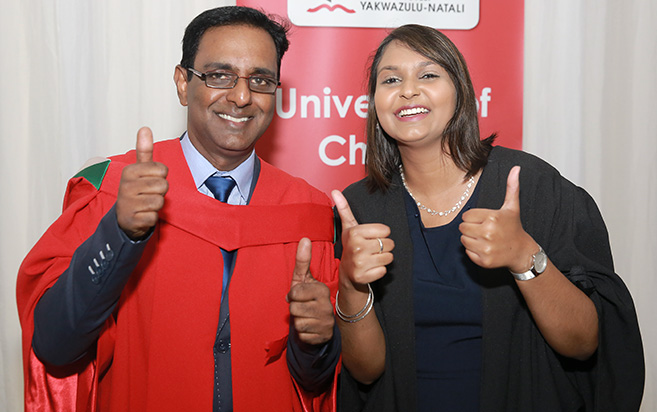 Father and Daughter Celebrate Graduation Together

Father and daughter, Dr Visham Budaloo and Ms Vandena Budaloo, earned their degrees from UKZN. Visham graduated with a PhD in Mathematics Education and Vandena with her MBChB degree.

‘I am proud my daughter has once again attained success,’ said Visham. ‘Her success has always been paramount to me. I was hoping to graduate with her, when I enrolled for my degree in 2012.  I am grateful to the Lord for his blessings in allowing us both to attain our dreams,’ he said.

Speaking about the support they gave each other during their studies, Visham said, ‘Vandena was a high academic achiever in primary and high school. When she matriculated as the Dux of Crawford College North Coast, and embarked on her medical degree, it inspired me to pursue my doctoral studies.

‘Emotionally we found strength in each other, knowing that both of us would encounter similar challenges. Whilst the content matter differed significantly, we were able to concur on issues relating to research methodology. As a family, we spent quality time encouraging each other when the journey was rough,’ he said.

As a mathematics educator, with a considerable amount of experience in both public and private schooling, Visham observed that the majority of learners had a phobia for mathematics. This, he felt, stemmed from the results of the National Senior Certificate examinations and internationally recognised benchmarking tests that indicated dismal results in mathematics in South Africa.

Being passionate about the subject, Visham felt morally obligated to change the image of mathematics. He was determined to find ways that would possibly enhance this image and improve the results.

‘Over the decades there has been constant debate about the nature of mathematics and how it is taught. Whilst many mathematicians advocated the use of symbolic and linearly based arguments, others promoted a visual approach to the teaching of mathematics. Visualisation was emerging as a powerful tool in teaching and its effects could not be ignored. I decided to examine the praxis of successful mathematics teachers with a view to establishing how they used visual reasoning,’ he said.

The results of his study showed that visual reasoning was at the intersection of three theories: Attribution Theory, Situated Cognition Theory and the Theory of Multiple Intelligences. The study found that teachers who used these theories attained more success by incorporating them into visual reasoning.

Thanking his family, he said, ‘My wife assisted me tremendously in taking care of the demands of the family. This allowed me the opportunity to continue with my research. I thank them for inspiring me and being the source of my strength during my studies.’

Visham thanked his supervisor Dr V Mudaly for his expertise, constant motivation and encouragement. He also acknowledged Professor Sookrajh for her expert guidance, constant support and belief in him as a student.