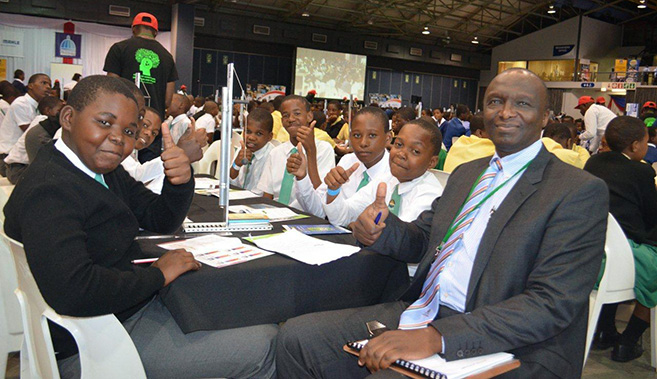 Professor Deo Jaganyi was one of three official judges at the successful attempt by Durban grade 9 school pupils to set a new Guinness World Record for the largest practical science lesson.

The 5th of February was a special day for South Africa, and more so for Durban. The city peaked on the world map as 2 104 Durban school children successfully broke the Guinness World Record for the largest ever practical science lesson.

Hosted at the Durban Exhibition Centre, the record attempt had been lodged with Guinness by MAHLE Behr South Africa, together with NGO, the Centre for the Advancement of Science and Mathematics Education (CASME).  Along with eThekwini Municipality, UKZN’s College of Agriculture, Engineering and Science was among the chief supporters of the event as it put its staff and students at the organisers’ disposal to ensure every opportunity for success.

Apart from laying claim to a genuine world record, and having a lot of fun at the same time, the innovative project aimed to develop a love for maths and science among schoolchildren. The learners participating were all in Grade 9, which is the critical period for making matric subject choices and educating pupils on the importance of core maths for STEM (Science, Technology, Engineering and Maths) careers.

In setting a new record for the largest practical science experiment, Durban’s youth smashed the existing record held by Vijnana Bharati, India (Delhi), for 2 000 students. With 2 104 confirmed participants, a comfortable winning margin for the new record was assured.

In order to make this mammoth undertaking a reality, 2 104 learners, 60 teachers, 50 stewards and 50 volunteers all congregated at the Durban Exhibition Centre. During the lesson, students completed two different experiments. In an innovative attempt to save costs, the two experiments had been constructed using by-product materials kindly donated by MAHLE Behr’s production processes.  Each participating school received a set of equipment after the attempt.

To meet the very stringent Guinness World Record criteria and standards, the lesson had to take place in a given timescale, together in a pre-determined place.

‘We had to meet a number of pre-requisites in order to get the official stamp of approval from Guinness,’ explained chief organiser, Mrs Jolene van Heerden. ‘The pack had to include a cover letter explaining the context of the record attempt. Then we had to get two independent specialist witness statements confirming that the rules had been adhered to and explicitly stating the exact and final figure of the total participants taking into account any participants who the stewards deducted from the total. The judges’ statements had to describe the counting process and overall attempt in detail. So it was all very technical.’

Video evidence of the entire record attempt was prepared and sent off to Guinness.  Another requirement was photographic evidence of the attempt taking place, capturing the details provided by independent witnesses.

‘Such strict rules are imperative because it gives credibility and weight to what is a ground-breaking effort,’ said officially-appointed Guinness World Record adjudicator and verifier, Professor Deo Jaganyi, who is Deputy Vice-Chancellor of UKZN’s College of Agriculture, Engineering and Science.  ‘Being part of the Largest Practical Science Lesson is the perfect vehicle to generate enthusiasm with 2 104 high school learners, and makes Science fun and exciting.’

The record attempt took place for an hour. During the adjudication process learners enjoyed a fun science show by Dr Tanja Reinhardt of the UKZN Science Centre, and got the opportunity to visit career stalls to find out more about STEM careers and study opportunities.

When chief judge de Villiers announced that Durban officially held the new world record for the largest practical science lesson, the hall erupted in a frenzy of excitement.