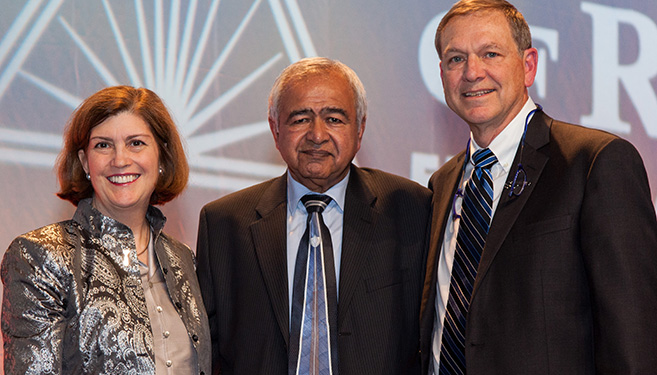 UKZN’s Head of Rheumatology, Professor Girish Mody, joined an esteemed group of Rheumatologists when the designation of Master was bestowed on him by the American College of Rheumatology (ACR) at their annual congress in San Francisco in the United States.

Mody is the first African Rheumatologist to receive this honour and is now among an elite group of Rheumatologists who have been inducted as Masters by the College since 1987.

Recognition as a Master is the highest honour the ACR bestows on its distinguished members aged 65 or older who have made a significant and outstanding contribution in the field of rheumatology through scholarly achievement and service to patients, students and the profession. ACR Masters are highly accomplished individuals who are nominated by their peers.

An internationally renowned Rheumatologist, Mody is passionate about improving the education and training of health professionals as well as playing an advocacy role to achieve better outcomes for patients.

He began his illustrious career completing undergraduate and postgraduate medical education and training at the former University of Natal’s Medical Faculty, after which he completed his Rheumatology Fellowship at the University of Cape Town, where he also obtained his doctorate.

In 1992, Mody was appointed as the first Aaron Beare Family Chair in Rheumatology at UKZN. He is also a Fellow of the Royal College of Physicians of London and a Fellow of UKZN.

In 2001, Mody was elected as ambassador for the United Nations endorsed Bone and Joint Decade 2000 – 2010 and is currently a member of the International Coordinating Council of the Global Alliance of Musculoskeletal Health, an organisation which strives to raise the profile of musculoskeletal diseases.

Despite a lack of designated training posts, his department has trained 11 Rheumatologists in KwaZulu-Natal, while a further two are currently doing their Fellowship. He is also involved in the teaching and training of Medical students and registrars in internal medicine.

Commenting on his induction as a Master, Mody said: ‘It is indeed an honour to be recognised by my peers. I am truly humbled to receive this designation and must acknowledge the inspiration from the many thousands of patients whom I had the privilege to serve, the passion and enthusiasm of generations of undergraduate and postgraduate students, and the support of my staff and peers throughout my career.’

Congratulating Mody on his induction, the Head of the University of Witwatersrand’s Department of Rheumatology, Professor Mohammed Tikly, said: ‘A well-deserved accolade for a man who has worked tirelessly for the good of African rheumatology. This is indeed a proud moment for him and his family.’