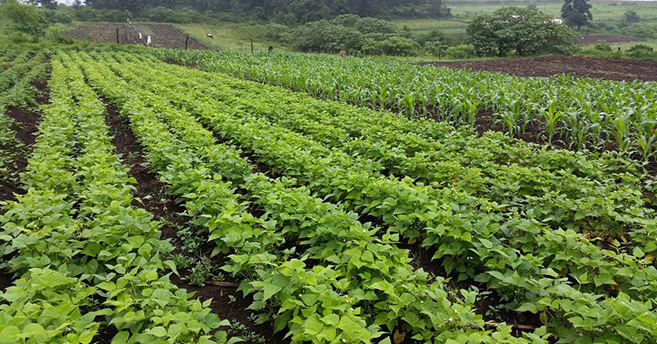 Traditional and scientific knowledge combine in agricultural practice at Swayimane to increase the climate resilience and adaptive capacity of crops.

With many parts of South Africa in the grips of a drought and 2015 having been one of the hottest years on record, climate projections for the uMgungundlovu District Municipality (UMDM) in KwaZulu-Natal are not encouraging.

Local research has indicated that these communities will experience a warmer future with lower average rainfall. With floods, severe storms and wildland fires already being among the main hazards currently faced by communities in the UMDM, there is a genuine cause of concern for the long term impact that climate change will have on the people living in this area.

This is further compounded as many are already vulnerable to these hazards owing to various non-climate related reasons such as low-cost and informal housing located close to river watercourses or on flood plains within catchments; housing of poor standard located on steep hillsides;  high-density informal and formal settlements; poor land use management and over-exploitation of natural resources, including grasslands; and  small scale farmers using crops and methods that are not resilient to the impacts of climate change.

In an effort to reduce significantly the vulnerability of the affected communities within the UMDM where low levels of income and education combined with a general lack of awareness are major contributing factors, the uMngeni Resilience project was launched in 2015.

The project was awarded in October, 2014 with the application proposal having started from 2013. The uMngeni Resilience Project proposes a unique approach to addressing the impact of climate change in South Africa.

This will be enabled through implementing a suite of complementary gender-sensitive project interventions, focusing on: i) early warning and ward based disaster response systems; ii) ecological and engineering infrastructure solutions specifically focused on vulnerable communities, including women; iii) integrating the use of climate-resilient crops and climate-smart techniques into new and existing farming systems; and iv) disseminating adaptation lessons learned and policy recommendations, to facilitate scaling up and replication.

The Adaptation Fund, as the primary funders, appointed the South African Biodiversity Institute (SANBI) as the National Implementing Entity responsible for overall project management and reporting to the fund’s board. For the uMngeni Resilience Project, SANBI partnered with the UMDM, who are the Executing Entity, to manage this initiative.

Having participated in the development of the project since 2013, UKZN’s School of Agricultural, Earth and Environmental Sciences, acting through the UKZN Foundation, was then contracted to lead Component 1.3 on seasonal weather forecasting and Component 3 on agriculture.

One of the main overall objectives of the uMngeni Resilience project is to reduce the vulnerability of these communities and small scale farmers in the UMDM to the impacts of climate change. This will be achieved by increasing climate resilience and adaptive capacity by combining traditional and scientific knowledge in an integrated approach to adaptation.

Professor Albert Modi of the School of Agricultural, Earth and Environmental Sciences said: ‘Climate change is going to be a major challenge and the sooner we understand ways in which to minimise the impacts the better off we will be. Certainly the rural communities are extremely vulnerable and this project will help with our research in not only developing a model that works but perhaps more importantly one that can be used in other parts of southern Africa.

‘We are most grateful and excited to be part of this project,’