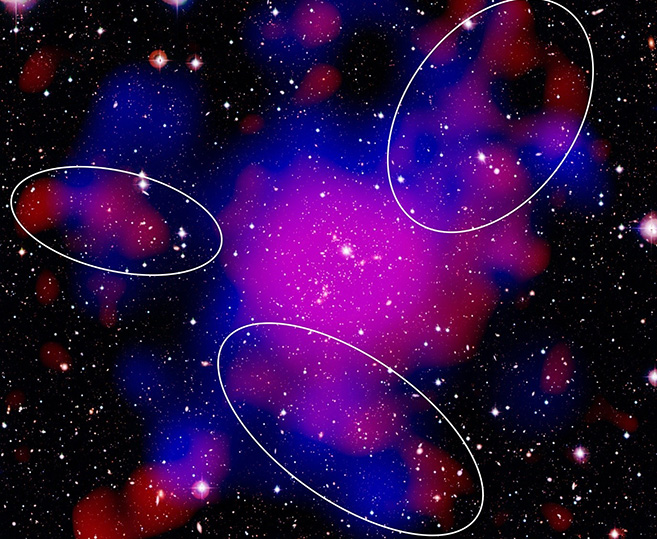 UKZN Honorary Astrophysics Lecturer Dr Mathilde Jauzac and an international team of astrophysicists have discovered three massive filaments of hot gas and dark matter flowing towards a galaxy cluster named Abell 2744, thereby uncovering a portion of the cosmic skeleton of the Universe.

Galaxies join together in clusters, which contain large amounts of gas and invisible dark matter and are held together by gravity. Different clusters are connected by elongated structures of hot gas and dark matter called filaments. Astronomers have theorised that the Universe is interconnected by filaments and that these interconnections form a Cosmic Web. In keeping with this idea, they have used computer simulations, to deduce that the cosmic web is the basic structure which is found throughout the Universe, from which stars, galaxies and clusters are created and grow.

Using 30 hours of observations obtained from the XMM-Newton Telescope in December 2014, the astronomers identified three filaments that are physically connected to the Abell 2744 galaxy cluster, and two filaments which are the projection of more distant structures viewed along the same line of sight.

‘We were finally able to detect the warm gas that composes these large-scale filaments. This work represents a really important step forward in our study of the build-up of the Cosmic Web,’ said Jauzac.

Jauzac, a former postdoctoral researcher at UKZN’s Astrophysics and Cosmology Research Unit, is currently conducting research at Durham University in the United Kingdom. The academic paper on this discovery which she has co-authored appeared in the Nature science journal on 3 December last year.