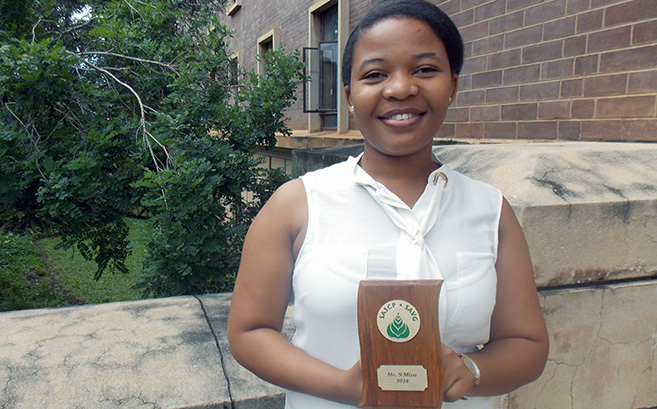 Ms Slindile Miya with her award from Omnia.

Ms Slindile Miya of the Discipline of Crop Science in the School of Agricultural, Earth and Environmental Sciences (SAEES) was an award-winner at the annual Combined Congress of the SA Societies of Crop, Soil, Horticulture and Weed Sciences held in Bloemfontein.

Miya, who completed her Masters in Agriculture in 2015, received the Omnia award for the best oral presentation by a scientist under the age of 40. This was Miya’s first presentation at a scientific congress, making the achievement all the more significant for the young crop scientist.

Her work focused on the interaction of a number of factors that impact seed quality, specifically genetic, environmental and management factors. In relation to her study, these factors were the density of the plant population, the cultivar used, hail damage, and the management practice of seed selection.

The results of the study showed that seed quality is negatively impacted by hail damage, with an important factor being the stage at which the plant is exposed to hail, with those in an early stage of growth able to recover, while plants exposed in later reproductive stages sustained permanent damage that reduced seed quality.

Based on the results of her work, Miya recommends that plant density is moderate to high, since high density planting uses resources more efficiently.

Miya used three cultivars, one of which is SC701, a popular cultivar in KwaZulu-Natal, which she says showed the most resilience. She also found that her results differed based on which of her two sites the crops were grown at. Her trial at Baynesfield Estate proved more adaptable in its seed quality response than her trial at Swayimane.

The motive for exploring the resilience and adaptability of this crop, Miya says, was the need for solutions to the globally-critical issue of climate change that will impact food security, particularly as the effects of climate change such as severe hailstorms are on the rise.

Miya noted that the serious hailstorms experienced in the Pietermaritzburg area in January 2015 were recorded in her experiment, exposing her trials to hail before she simulated hail damage, but fortunately not causing too much damage.

She said that she hopes the results of her study will be useful to farmers and industry looking to mitigate the effects of climate change on crops. Miya also encouraged others to work passionately and tirelessly at their studies to achieve success.

Miya, who is supervised by Professor Albert Modi, aims to undertake a PhD looking at the seed quality of the Bambara groundnut.