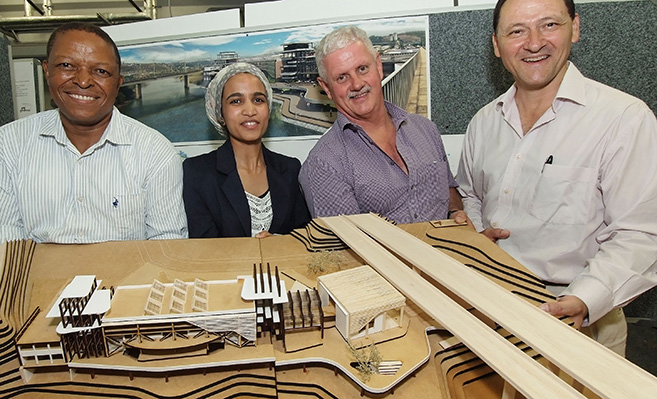 From left, Mthembeni Mkhize, Head of UKZN’s Department of Architecture; the winner, Najeeba Hassim; Allin Dangers; and Ruben Reddy, President of the KZN Institute for Architects.

Najeeba Hassim of the University of KwaZulu-Natal has won the regional Corobrik Architectural Student of the Year Award.

The competition, which is now in its 29th year, is between students from the country’s eight major universities. Regional winners are awarded on the basis of a final theses before going head to head at the national awards ceremony scheduled for Johannesburg in May.

Calling it the Green Centre, Hassim placed her design along the edge of the uMngeni River, in Briardene. The facility was aimed at searching for solutions to improve the river water quality, protect and enhance ecosystems and harness untapped potential for river currents.

Second placed Jean Pierre Audibert’s thesis “The Cemet” promotes a discussion about the cemeteries or these “lost” spaces, as he described them, in the city of Durban. In third place, Julie Eneman’s thesis addresses the trauma of rape, sexual assault and abuse in an inner city support centre for Durban women.

The Director of sales at Corobrick, Allin Dangers, said the students had shown outstanding innovation and technical skill in their designs.