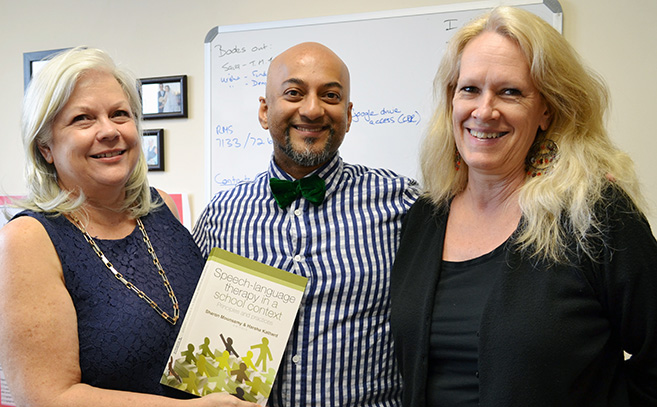 Three academics from UKZN’s Discipline of Speech-Language Pathology have contributed chapters to a new 2015 textbook which focuses on ways in which Speech-Language Therapists and Audiologists work with learners in South Africa’s education system.

Editors Professor Harsha Kathard of the University of Cape Town, who obtained her undergraduate and postgraduate qualifications from UKZN and Dr Sharon Moonsamy of  Wits, invited academics from the country’s six universities which offer Speech-Language Pathology programmes to contribute chapters to the first-of-its-kind textbook titled: Speech Language Therapy in a School Context: Principles and Practices (Van Schaik).

There are also contributions from professionals in the fields of Education, Psychology, Occupational Therapy and Social Work.

Dr Penelope Flack, UKZN’s Academic Leader for Speech-Language Pathology, said as a result of this collaboration across universities, every chapter had its own flavour. She described the textbook as ‘a unique resource’ for both students and health care professionals, across a number of disciplines, who work in schools.

Currently, there are many learners with barriers to learning in mainstream schools and are unable to access the support they need.  This is even more of a challenge for learners attending schools in rural and underserved communities.

Flack explained there were currently less than 2 000 registered Speech-Language Therapists in South Africa with its population of 55 million. She said many clinicians chose to work in private practice because there were not enough funded posts in the public sector.  As a result the clinicians working in the public sector had enormous case loads, and those working in education in particular needed to find new models of service provision.

The textbook was said to promote collaborative practices among professionals, including Occupational Therapists, Physiotherapists, Learning Support Therapists and Teachers, while reinforcing the ethical principles and practices required by the Health Professions Council of South Africa.

Flack and her colleague, Ms Jenny Pahl, co-authored a chapter on multiculturalism in the classroom, with UKZN PhD graduate, Ms Thandeka Mdlalo, also contributed; while Professor Mershen Pillay contributed a chapter focusing on communication in an educational context, co-authored with Professor Kathard.

Observors believe Speech-Language Pathology students will benefit immensely from the textbook because not only is it informed by research and reflective practice from each of the contributors, it also has a strong focus on training graduate competencies around multilingualism and multiculturalism in clinical practice where students get to engage with clients more on an interpersonal level.

* A Speech-Language Therapist works with anyone with language, speech, voice or swallowing disorders. UKZN is the only institution in KwaZulu-Natal which offers a programme allowing students to get the hands-on experience of learning about the science of speech, and what qualifies them to practise as Speech Language Therapists.