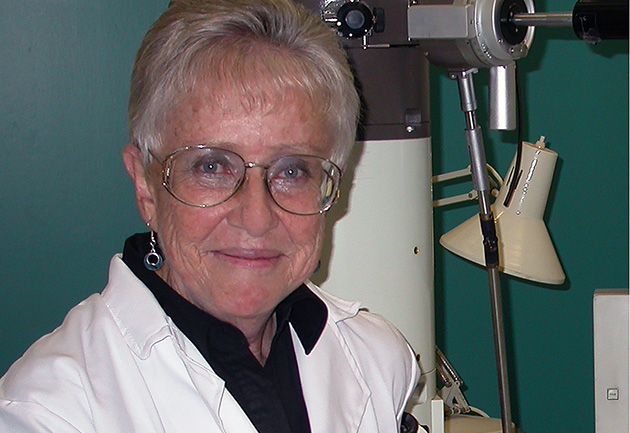 Family, friends, colleagues and students gathered at a function on the Westville campus to pay a warm tribute to Professor Patricia Berjak who died recently.

Berjak, an NRF A-Rated Scientist, was an Emeritus Professor in UKZN’s School of Life Sciences.  Her speciality was research into recalcitrant seeds – these are seeds which cannot be stored dry and therefore lack the ability to survive long enough in storage thus undermining food security in the developing world.

A recipient of the NRF President’s Award for Lifetime Achievement and a world leader in her field, Berjak’s career at UKZN and the former University of Natal spanned 48 years.

During a simple, dignified and heartfelt ceremony in the Biological and Conservation Sciences Building, “Pat” - as she was affectionately known - was remembered for her unique character and incisive academic excellence.

Master of Ceremonies at the gathering, Dr Sershen Naidoo, who was Berjak’s colleague and former student, said her memory would live on through her research group as well as in the School of Life Sciences and in the conversational space engendered by its home, the Biological and Conservation Sciences building.   Naidoo paid tribute to her exceptional ability to teach:  ‘Pat didn’t just teach you, she taught you how to approach and appreciate science.  She was not easy to work with because she challenged you to be better.  She demanded excellence and saw the potential within you.

‘When Pat was in the building, you knew.  You would never expect someone so small to shout so loud.  She was the only person I knew who could yell at me with care.  I will miss her screeching my name down the hall, cigarette in hand.  I will miss my source of inspiration.  Being her student was the highlight of my career.’

Another colleague, Professor Jenny Lamb, focused on Berjak’s academic achievements.  ‘Pat’s PhD thesis, a bright red, six inch tome on ageing in stored maize seeds, marked the start of her work in seed biology,’ said Lamb.  ‘Her work on the eco-physiology of mangroves was her first important published work, while her work on recalcitrant seeds is what she is best known for.  Over the course of her career she supervised 37 MSc and 16 PhD degrees.   Pat valued collaboration, and had the ability to fit people to projects.

‘Pat was hugely influential as a thinker, leader and researcher,’ said Lamb.  ‘She was competent and decisive, a scientist through and through, with an insistent curiosity that was followed by rigorous study.’  Lamb quoted A-rated academic and a former student of Berjak’s, Professor Jill Farrant, who referred to Berjak as ‘a supervisor and mentor of the highest order who made me the scientist I am today’.

Lamb also touched on Berjak’s human side, calling her ‘utterly memorable’ and alluding to her love of cats,  her passion for ballroom dancing, her enthusiasm for photography, her wry humour and her colourful expressions of disapproval, including ‘Oh vomit!’, ‘Pah!’, and ‘Cretin’, which she reserved for particularly  “slow-witted” students.  ‘But this tough exterior masked a marshmallow interior,’ explained Lamb.  ‘She wanted her students to try harder, work longer, think stronger and strive for excellence.’

The University of Witwatersrand’s Professor Dave Mycock was also a former student of Berjak’s.  ‘My first meeting with Pat in 1979 was memorable because she reprimanded me about my incorrect spelling of xylem.  She was my mentor, a dear friend, and a fellow drinker of tea and of cold tea - which was whiskey and water after work, disguised in a tea cup.

‘Thank you, Patricia, for your generous nature in all that you did,’ said Mycock.  ‘So many people benefitted from your wisdom so generously given.  You achieved so much and influenced so many.  Thank you for your razor intellect, for unpacking what recalcitrant is in scientific terms.  For your wicked humour and for your sense of the ridiculous.  Thank you for your obstinate resolve when fighting for a cause, especially for your beloved mangroves.’

Mycock especially thanked Berjak’s husband and academic collaborator, Professor Norman Pammenter, for ‘allowing me into your personal time and space with Pat’.

Ms Rosanne Diab, President of the Academy of Science of South Africa (ASSAf), was next to pay tribute to Berjak, detailing her involvement with ASSAf, the 400-strong ‘brain trust of the nation’.  As a founding member of ASSAf and vice-president for the past seven years, the academy was a cause dear to Berjak’s heart because ‘it embodied the values she lived by, namely, excellence and service to society’.

Diab said that the tributes which had poured in for Pat from around the world had two common strands – they recognised her stature in the South African and global scientific community as a ‘giant and role model who made a huge contribution to knowledge production’, and lauded her ‘unique persona’.  ‘Pat was never afraid to voice her opinions, which were always strong.  There were no shades of grey.  She truly made her impact wherever she went,’ said Diab.

Current PhD student Ms Cassandra Naidoo referred to Berjak as ‘the woman who had the most profound impact on my life.’  Naidoo said it was difficult to comprehend that her supervisor was no longer around to correct her writing.  ‘Everything I did and achieved in science was for her,’ said Naidoo.  ‘She was the reason I could face any challenge because I knew she was behind me.’

Naidoo said she felt privileged to be a product of Professor Pat Berjak.  ‘Through the continued work in seed science research, her legacy will live on forever.’

As past Chairman of the Durban Botanic Gardens Trust, historian Professor Donal McCracken worked closely with Berjak who was later the Deputy Chair and a fellow trustee. McCracken said Berjak was an ‘intellectual who was hard working, methodical, free thinking and an outstanding research leader.

‘Pat had an ingrained natural courtesy,’ he said.  ‘She was a non-conformist but she never used that non-conformity for personal advancement.  She had no time for humbug.’

Ms Denise Berjak shared fond memories of growing up under the benevolent interest and guidance of her aunt, who ‘loved crime novels but hated moths.  Determined is a great word to describe Pat.  She taught me that good things happen to those who work hard for them.

‘She was the strong woman behind many of us.  Under that tough shell lived a great, big, soft heart.’

In closing, Berjak’s husband for more than 48 years, Professor Norman Pammenter, warmly thanked people for their tributes and commented especially on the ‘loyalty Pat engendered in people, and her ability to turn that loyalty into love.

‘She had a tremendous ability to impact people,’ he said.  ‘Loyalty, love, impact.  She was a remarkable woman.  I will miss her.’