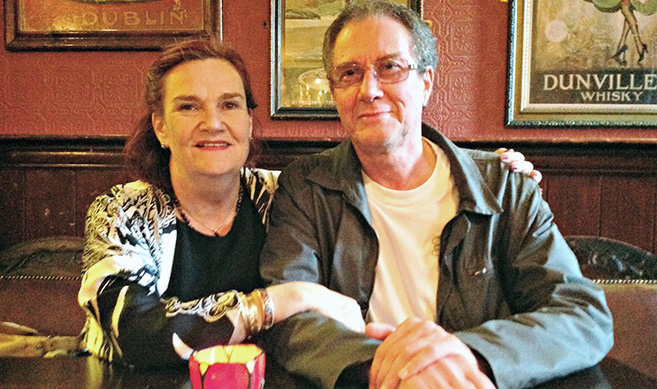 Professor Keyan Tomaselli has Retired after 29 Years at the Helm of UKZN’s Centre for Communication, Media and Society

This is his farewell speech:

A few months ago I got this missive from a past student.  Nilika Bidasee wrote:

‘I do hope that you remember me - I was in CCMS as an undergraduate and postgraduate student, and miss my days of you torturing us, while Professor Ruth soothed our wounds: Jokes aside, my time at UND/UKZN, and particularly in CCMS, set me on the path I am today - a passionate Lecturer at the Midrand Graduate Institute.’

Well, I will be torturing UKZN students no more.

As from February 1, 2015, I took up a five-year post at the University of Johannesburg (UJ) as a Distinguished Professor. I will thus be returning to the city in which Ruth and I grew up and where we got married.

My 30-year stint at UKZN started in 1985 when I was a green, brash, and inexperienced Professor, in a relatively small and highly collegiate institution. I departed from a massively enlarged university as a Professor Emeritus, wiser, grizzled and in search of new creative and intellectual challenges.   Some of these will include UKZN where I am now a Professor Emeritus.

I had not initially applied for the CCMS post that I was to assume. But the indefatigable Chris Ballantine visited us in Grahamstown in 1983 and he persuaded me to apply. He assured me that the University of Natal was no longer the politically conservative institution that it once was.  Indeed, so democratic had it become that faculty meetings sometimes ran for two days, often well into the night, as we debated and made policy. No-one had to fill in time sheets or workload calculations – we just did our jobs with great passion, like our students.

Few academics are afforded the opportunities that I and the CCMS team have experienced – the research-based graduate programme being the key.  Building CCMS’s global reputation could not have occurred without the dream team of Ruth Teer-Tomaselli, Lauren Dyll-Myklebust, Eliza Govender, and earlier lecturers such as Eric Louw, Miranda Young, Eunice Ivana and Nhamo Mhiripiri, and the hundreds of CCMS graduates, many of whom  who later returned significant resources to the Centre.  Space does not permit me to list all of them, so here are just a few who both studied and worked in the Centre, many since inception:  the late Lynn Dalrymple, Warren Parker,  Patrick Coleman and Richard Delate, Emma Durden and Mkhonzeni Gumede and Dudu Zwane with regard to public health communication.    Mary Lange, Jeanne Prinsloo, Mike Maxwell and Arnold Shepperson contributed significantly to other areas of activity over long periods.

In advisory capacities, the support of Ntongela Masilela, Lionel Ngakane, Moosa Moosa, Mazise Kunene, Graeme King, David Wiley, Helge Rønning and Stuart Hall need to be acknowledged. Administrators who went the extra mile included the irrepressible Santie Strong who has outlasted all of us, as well as Susan Govender, Sarah Strauss and Ausie Luthuli.

In the early start up days a succession of deans batted for us in faculty and Senate.  Ben de Wet, Tony Voss, Andrew Duminy, Hilstan Watts, George Trotter and Mike Chapman kept things going through the difficult 1980s into the 1990s, while the support from Vice-Chancellors and their deputies, Pieter Booysen, Colin Webb, Chris Creswell, Ahmed Bawa, Brenda Gourley, James Leatt, Eleanor Preston-Whyte and David Maughan Brown, was unstinting. More recently, deans like Donal McCracken. Michael Green and Nhlanhla Mkhize played key roles.  My thanks also to Professors Malegapuru Makgoba, Joseph Ayee, Salim Abdool-Karim and Cheryl Potgieter in recent years whose support has been valued.  In the 1980s, when UKZN was smaller, Manfred Hellberg, Derek Wang, Costas Criticos, Jasper Cecil, the late Ben Parker and many others made life and work interesting.

The early Unit drew its lecturers from the Faculties of Science, Education, Medicine, Arts and Social Science.  We were a wonderfully eclectic and energetic bunch and, in the pre-SAQA days, seminars would sometimes go on for two days or more in the classroom, in the corridors, the stairwells and back again.    Now its two hours or get bust by HEMIS and the work load calculator.

The establishment of CCMS was a momentous development at the University of Natal.  A palace coup, so to speak, had seen off a conservative top management, and the new brooms Pieter Booysen, Colin Webb and Chairman of Council Graham Cox, swept clean.  They, with the Faculties of Arts and Social Science, pushed through a long standing proposal for the establishment of a Unit that would examine and theorise media-society relations and cultural studies as a form of anti-apartheid struggle, and we developed a structure that would be popularly engaged.

Natal University was during the next five years to become known in local communities as a historically Black institution, a symbolic recognition of the University’s community engagement via the 70+ community organisations working from campus in opposing apartheid.  CCMS itself housed a number, like the Durban Media Trainers’ Group, the Natal Video and Allied Workers Organisation and the Westville Residents’ Support Group.  These were the days before PMs, PUs and workload templates when we did what we had to do to educate our students and bring democracy to the country.

These were also the days when deans got dirty with academics in the trenches, when VCs led peaceful student protest marches through the adjacent suburb, and confronted the security police impatiently flexing their sjamboks.  We all got tear gassed and chased across campus together.  These were the days when academics and students themselves made institutional policy.

During the 1990s folks like Ruth Teer-Tomaselli, who had just completed her UKZN PhD,  I am told by some ex-SABC Board members, single-handedly saved the Corporation, and she via the SABC’s voter education project, took the procedure to the nation via radio and TV.   At Brenda Gourley’s invitation, she represented Natal University at the Forum of African Women Educators, and she was offered a UNESCO Chair in Communication based here at Howard College.

The merger in 2004 brought its own challenges and opportunities, and CCMS went from strength to strength with extensive external funding from USAID/Johns Hopkins Health and Education, with smaller amounts from other social change and research organisations. Two hundred and fifty students participated in indigenous knowledge research projects, many of them now published and working in the field.   Our graduates are indicative of our success.   Two such successes are our two strategic research partners DramAidE, led by Mkhonzeni Gumede, and Art:  A Resource for Reconciliation Over the World, managed by Mary Lange.  Both have done extraordinary work and actively enriched CCMS.

CCMS was the first stop in Vice-Chancellor-elect Professor WM Makgoba’s pre-appointment tour of the University in 2001.   Makgoba had rearranged his schedule to include our Centre in his official itinerary. This news spread like wildfire across the University.  I was getting calls from everyone – why CCMS?  What’s our secret they asked?

Some of the war stories and general strategies were told by Dr Vincent Maphai during his keynote address at the 10-year merger commemoration held on 29 October, 2014. It’s been a long haul since then as all South African universities had to engage three simultaneous and endlessly exhausting interacting processes:  i) post-apartheid transition, ii) integration into the Information society, and iii) re-incorporation into the community of nations.

CCMS has travelled a long path.  My appreciation to all who came along for the ride.  And, what a ride it’s been.  Avatar in big screen 3D ain’t got nothing on a CCMS field trip through the dunes, the battlefields, the jungles and SACOMM (SA Communication Association) conferences.

My apologies to those whom I know I annoyed in the process. I took on finance officers, campus vice-principals and support division managers.  My mischievious reputation as a “fixer” – or as a trouble maker – according to my recent very supportive Dean, Nhlanhla Mkhize, follows me to this day.  But, as the Professor of Politics Sandy Johnston used to say, ‘Somebody’s gotta do the dirty work’.  Ruth tells me she has the scars to show for my impetuousness. For the hardy, you might like to read the official history of CCMS here: http://www.tandfonline.com/doi/abs/10.1080/02560046.2012.663158   (free access).

To UKZN, my appreciation for the extraordinary opportunity given us.

Ruth will continue as leader of the new CCMS as its moves into the future with new projects, new directions and new students.   Inevitably, my creative swashbuckling management style needs to be replaced with a tight approach that Ruth brought to the Centre in 2014.

My best wishes to everyone.

My UJ address is Keyant@uj.ac.za