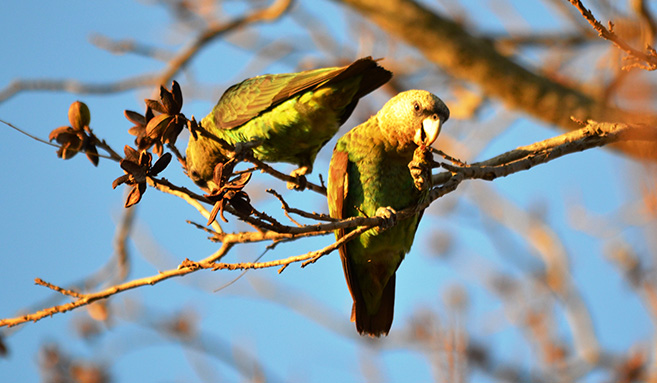 A group of researchers in the School of Life Sciences in Pietermaritzburg this year published a paper titled: “Molecular Systematics of the Cape Parrot (Poicephalus robustus): Implications for Taxonomy and Conservation”.

The paper gained international attention due to its conclusion that the Poicephalus robustus parrot, at the centre of much debate among biologists and conservationists, should be conferred the status of a full species.

It is the most comprehensive analysis of the taxonomic relationships within the P.robustus clade using molecular data. According to the group, clear genetic differentiation of the parrot from others in the Poicephalus group, coupled with the differences in morphology, habitat and dietary needs, provide strong scientific evidence for the elevation.

Using DNA extracted from samples of 138 Poicephalus specimens representing five African species, the team conducted multi-focus DNA analyses to determine that Poicephalus robustus, or the Cape Parrot, is genetically distinct from the other P. robustus sub-species.

The results surprised the group, since there is not the kind of shared genetics between the Cape parrot and other groups within the P.robustus group, such as the grey-headed parrot, despite the fact that they are found in similar regions. The study also included the construction of phylogenetic trees and molecular clock analyses to examine evolutionary relationships.

Thanks to this study and the birds’ subsequent reclassification, the researchers hope that the South African endemic Cape Parrot will be viewed as a vulnerable species of conservation priority. The birds’ new status could enable conservation management strategies to be planned for and put into place more effectively.

This, according to a 2014 report by Downs, is essential as the parrot is critically endangered, with less than 1 600 Cape parrots recorded in the wild. Among the threats the birds face are the illegal hunting and capture of the bird - a pair of Cape parrots is worth as much as R120 000. Added to this is the increasing threat of habitat loss due to anthropogenic activity such as agriculture and forest clearing for commercial forestry, as well as other threats like disease.

The group hopes that their findings will raise the profile of these threatened birds and contribute to ensuring their survival.