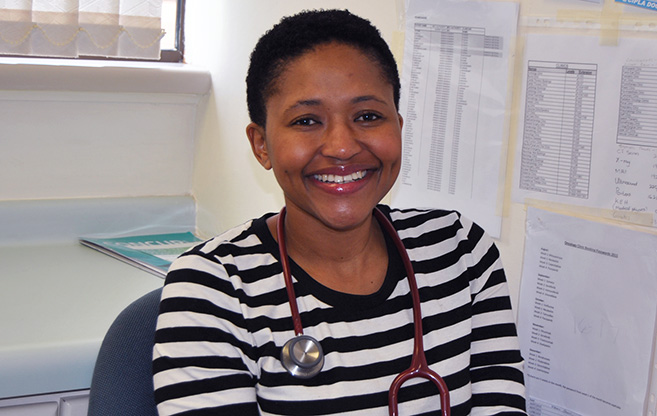 As a sickly child, Ngidi used to marvel at how doctors could put a smile on the face of an ailing child in a few easy steps. ‘That had such an impact on me,’ said Ngidi. ‘I made up my mind well before my teens that I wanted to be in medicine.’

She said she was both excited and overwhelmed by her success. She was not doing this for glory, she said, but she wanted to do something different.

‘I am not a typical person. I have always believed in breaking the boundaries. I don’t believe in limits. I always want to do what most people say I cannot do or that is not for women,’ Ngidi smiled.

‘My parents, especially my father, feel like celebrities because everyone in our community has been phoning to congratulate them for raising a great child.’

The daughter of a nurse and a farmer, Ngidi works at Inkosi Albert Luthuli Central Hospital and was born in Port Shepstone.  She grew up in Gamalakhe Township.

She said that while growing up in the township her parents were very strict.  ‘I was restricted to being indoors. I had a curfew. In order to watch TV, you had to earn that privilege by getting certain marks at school.’

Ngidi matriculated aged 17 from Port Shepstone High School in 2000 with four distinctions. She then pursued her medical studies at UKZN from 2002 until 2006. She said her chosen path was made easier by the people she met at Medical School.

‘UKZN’s retired Oncology HoD, Professor Amo Jodaan, got me interested in oncology. He encouraged us and guided us by keeping us motivated and passionate about what we do,’ said Ngidi.

After doing her two-year internship, followed by one year of community service on her way to becoming a doctor, she then worked as a Medical Officer at an ARV clinic at KwaMashu Polyclinic in 2010. She obtained a Medical Officer post in Oncology later that year. In 2012, she got a Registrar post at Inkosi Albert Luthuli Central Hospital in Radiation Oncology.

To this day, she credits the KwaZulu-Natal Department of Health for changing her life by awarding her a bursary to pursue her studies.

Ngidi initially wanted to be a dermatologist after she sat in on one of UKZN’s Dermatology HoD, Professor Ncoza Dlova’s lectures.

‘My love of medicine was ignited by lecturers like Dr Ncoza Dlova and Professor T Madiba.  They encouraged us as students to study further to be specialists. I wanted to be a dermatologist like her then I discovered radiation oncology and knew that’s where I needed to be,’ she said.

‘I would love to be mentored by inspirational and humble women like Dr Nkosazana Dlamini-Zuma. She is one of the women I look up to and she is a first in most things,’ Ngidi said.

Although still basking in her glory, Ngidi has already set her sights on completing her Masters in Radiation Oncology next year – and furthering her studies. She hopes her life story will inspire others who might want to follow in her footsteps. Her research interest is breast cancer.

Her future plans include getting into academia and she would also love to explore other health avenues globally. She is an advocate of healthy lifestyles and regular health screening as strategies to mitigate the impact of non-communicable diseases such as cancer.

‘I always preach that, if you feel a lump, don’t waste any time. Don’t just think it’s something small that will go away. Come forward, get it checked. We need to destigmatize disease and accelerate health education.’

She attributes her success to nothing less than sheer hard work and the importance of devising a plan and sticking to it.

‘It’s always good to know from the word go what you want in your life, because then you can chart your life. I picked my subjects carefully, and made sure I performed at a certain level, and made sure I got the points I needed to get into medicine, and exceeded that just to get in,’ she explains.

Ngidi describes herself as a ‘very bubbly personality, but I’m reserved at the same time.’ She lists among her hobbies hiking, running, concerts, attending food and wine festivals, and watching theatre productions.