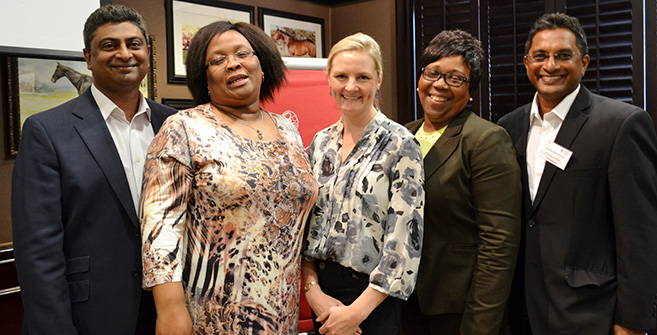 This was at a Symposium held at the Oyster Box Hotel in Durban, in recognition of each graduate’s research excellence. Two doctoral researchers were new Heads of their respective departments: Professors Ncoza Dlova and Koleka Mlisana, as well as Drs Cheryl Baxter, Vineshree Govender, Zandile Gumede and Mergan Naidoo.

The multidisciplinary cohort was congratulated for finding solutions and possible cures to South Africa’s health challenges by the MEPI-UKZN team, the US President’s Emergency Plan for AIDS Relief (PEPFAR) and the provincial Department of Health at the Symposium.

‘This programme, which will have produced about 50 PhD graduates when complete, was structured with the understanding that these academics are often responsible for teaching as well as clinical duties and require special support and encouragement to complete a PhD,’ Pillay said, encouraging the current candidates also to pursue excellence.

Professor Dlova studied the spectrum of ethnic skin and hair disorder, and the composition and use of skin-lightening preparations, traditional cosmetics and sunscreen. The study called for more public awareness campaigns and further research into the use of clays as sunscreens on a commercial level.

Dlova advocated further training of hair stylists in formal and informal settings on hair disorders to ensure appropriate treatment is advised.  She also called on government to step up its regulatory mechanism to ensure more effective control around the production, import and sale of products containing harmful ingredients.

‘The impact of sexually transmitted infections (STI) and genital tract inflammation on HIV-1 acquisition and rate of disease progression in subtype C infected women’ was the title of Professor. Mlisana’s study. ‘A key finding in my study was that vaginal discharge is a poor predictor of STIs and that syndromic management of STIs misses a significant proportion of women with asymptomatic infections,’ she said.

‘We are now in an era where we could say we are on the brink of conquering HIV. However, the next big challenge we face is the impact and effects of this epidemic. Whilst we might have a good handle on the HIV and AIDS epidemic, the co-infections remain a battle. Another major area is the devastation HIV has caused at a social level. We are faced with orphans, and many teenagers who contracted HIV from their mothers,’ Mlisana said.

‘The funding received from the MEPI REMETH Programme was used to support directly my laboratory-based research and has expanded my skills set and exposed me to the fascinating field of antiretroviral drug resistance,’ Baxter said.

Conducted among 889 women using intermittent tenofovir 1% gel for HIV prevention, the study found no association with hepatic flares, no effect on hepatitis B viral load and did not enhance the development of tenofovir resistance genetic mutations. ‘Women with HBV infection can therefore safely use tenofovir 1% gel for HIV prevention without adverse impact on their HBV infection,’ she said.

Dr Govender’s study was titled: “The role of Adiponectin, Leptin, TNF-a and Resistin in HIV-associated pre-eclampsia”. She stressed that pregnant women needed to go for regular check-ups.  ‘We simply do not encourage this often enough and yet regular checks allow for early intervention if there are any problems.’

“Nobody has been able to identify the cause of pre-eclampsia but we do know that controlling your blood pressure ensures a safer delivery. Young women often mistakenly believe that just because they are young they will have a relatively risk-free pregnancy. We must continue to reiterate that pregnancy is high risk and women need to ensure they book early at their clinics,” Govender recommended.

Dr Gumede conducted an analysis of the health behaviour of children from child-headed households in a selected health district in KwaZulu-Natal. Her PhD was an attempt to bring the very difficult circumstances of her participants into a documented reality so that appropriate intervention could be strengthened.

The results of Dr Naidoo’s research – Head of UKZN’s Department of Family Medicine Clinical Unit - were presented to the National Department of Health and to specialist subgroups in the National Committee for Confidential Enquiries into Maternal Deaths in South Africa, resulted in support for the implementation of the World Health Organization surgical safety checklist as a minimum standard of operative care in South Africa.