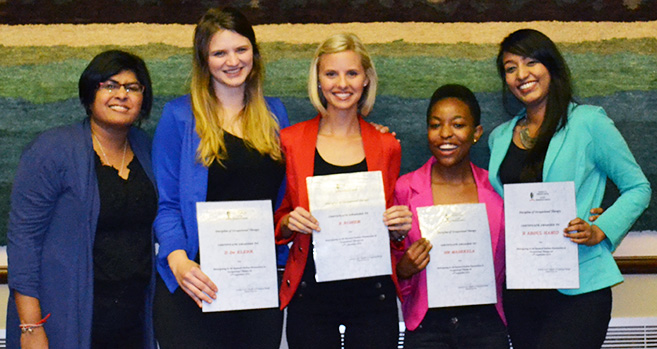 The winning students and their supervisor.

UKZN came out tops this year when the Vona and Marie du Toit Foundation awarded its prestigious 2015 Student Research Project Award to a group of final-year Occupational Therapy  (OT) students.  The award is given to the best undergraduate research project out of eight universities in South Africa where OT is presented.  The evaluation was done independently.

The students, Domonique De Klerk, Rochelle Romer, Nthabiseng Masekela and Romaana Abdul-Hamid were overjoyed to learn that the Foundation had selected their project – ‘Exploring how the physical and social environment of a well-resourced crèche in eThekwini influences play in children between the ages of three and four years’- was this year’s Best Project.

Their study increased the awareness of the impact of the physical and social environment on a child’s playfulness and the need for both caregiver and assistant to play an active role to enhance playfulness. ‘It highlighted the need and importance of making adaptations to the playground to instil a sense of safety, allowing access to play equipment as well as promoting interaction between peers,’ the group said.

The Vona and Marié du Toit Foundation is a legally constituted body that was created to develop and promote the legacy of the teachings of Vona du Toit and more specifically the Vona du Toit Model of Creative Ability (VdTMoCA). It also promotes research amongst younger members of the OT profession.

‘We are delighted to inform you that your group has been awarded the Marié du Toit Research prize for 2015,’ The Foundation’s Chairperson, Jodie de Bruyn said in a letter to the students.

‘We hope that you submit your project for publication and further your studies,’ de Bruyn said.

OT Academic Leader, Professor Kitty Uys said: ‘This award to our undergraduate students is evidence that the Occupational Therapy Division of UKZN is establishing itself as a strong research entity in South Africa. Play is the occupation of the child and the physical and social environment should be engineered to facilitate play.’

Uys said: ‘The use of technology such as “GoPro” pressed for relevant data collection in real life situations and findings will inform Early Childhood Development Centres about strategies to enhance physical and social environments.’