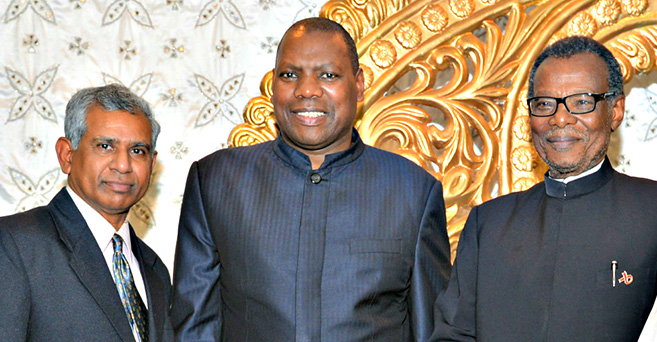 The founding idea of the Centre for Indian Diaspora Studies (CIDS) was launched recently at a Gala Dinner at the Durban City Hall, as part of UKZN’s Indian Diaspora Conference.

The Centre is envisaged as a primary platform to systematically conduct research on the Indian Diaspora in South Africa, and to offer seminars, workshops and short courses on Indian languages, cultures and histories.

Speaking at the event, Emeritus Professor within the School of Religion, Philosophy and Classics (SRPC), Professor Pratap Kumar said: ‘Durban is the main region where a majority of the South African Indian communities reside, so the Centre, operating within UKZN, would profile their presence and interests and engage various stakeholders at various government-levels, business, community and the global Indian community. The Centre would be the intellectual hub of the Indian diaspora within South Africa, for the engagement of scholars as well as civil society.’

UKZN’s Professor Salim Abdool Karim added that the Centre will be seen as a celebration of the Indian community and will reflect on the ongoing role they play in society whilst also allowing for open collaboration and discourse in an effort to strive for excellence in Higher Education.

The Indian High Commissioner Mrs Ruchi Ghanashyam said: ‘Within the Centre will be a Diaspora Museum that will contain artefacts and documents relevant to the Diaspora. We call on the public to assist with the provision of these remnants of history to showcase the significant progress of South African Indians.’

The Conference and launch of the Centre came at a time in which the KZN province experienced racial tension and hate speech directed at Indians in South Africa by anti-Indian mobilisation groups. Speaking at the launch, Durban businessman Mr Vivian Reddy called on the business community to reach out to bring together the Indian and African communities.

‘We cannot hide away from these issues. I hope to engage with UKZN management to host a symposium for the African and Indian Business community. We must all play a part in nation-building and look at things positively,’ said Reddy.

At the launch, ANC Treasurer-General and UKZN Chancellor Dr Zweli Mkhize condemned the anti-Indian mobilisations stating that South Africa belongs to all that live in it. He also noted the significance of the Centre in recognising the contributions that Indians have made in the apartheid struggle and in nation-building.

‘We should display the spirit of reconciliation for social cohesion. This conference is one such platform to discuss the solutions to take the country forward. We are aiming for the dawn of a new democratic dispensation of the South Africa society working together,’ said Mkhize.

Echoing his sentiments, Minister of Cooperative Governance and Traditional Affairs, Dr Pravin Gordhan called on academics to provide insights on the diaspora in the 21st century and to further interpret issues of the conference’s theme of “Ethnicity, Race and Citizenship: the Place of Indians in the new South Africa”.

Referring to the issue of racial tension, Gordhan said: ‘The Centre for Indian Diaspora Studies stands as testament to the role and place of Indians in South Africa.  We should be looking to prepare the next generation as leaders, academics and activists and create a new national identity.’

Also attending the Conference was leader of the Inkatha Freedom Party (IFP) Inkosi Mangosuthu Buthelezi who offered his support to the conference. ‘South Africans of Indian extraction are still South African, and no less so. Whether you call yourself Indian, South African, Hindu, academic or student, you remain of equal value to “the new South Africa”.

‘Begin not from the question of whether Indians have a contribution to make, but from the premise that your contribution is eminently valuable. South Africa cannot move forward with its character and health intact if parts of us are left behind or left out. That is a lesson we cannot afford to learn the hard way. It is a truth we must readily embrace,’ he said.