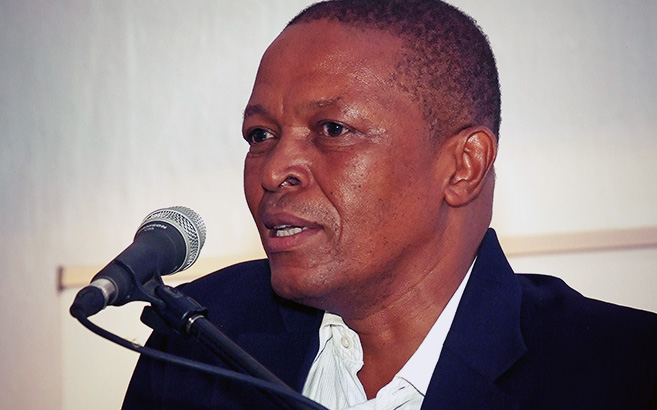 Mr Mthembeni Mkhize, recipient of the Scroll of Honour by the KwaZulu-Natal Institute for Architecture.

A UKZN academic who abandoned a lucrative architectural private practice in order to share his considerable skills with students, was recognised for his work recently with an accolade from the KwaZulu-Natal Institute for Architecture (KZNIA).

Mr Mthembeni Mkhize, Cluster Leader: Architecture, Planning and Housing and Academic Leader in the School of Built Environment and Development Studies (BEDS) at UKZN, received a Scroll of Honour from KZNIA for his dedicated service to the profession and the institute.

Mkhize was elected by the President and Regional Committee of KZNIA, Mr Ruben Reddy, to receive the award which was presented to him at an awards function held at the KZN Art Gallery.

‘Mr Mkhize has sacrificed a lucrative career in the private sector as a targeted practicing architect to dedicate his life to the education of young aspirant architects,’ Reddy said.  ‘There are only 3 500 architects in South Africa, with African architects numbering less than 50.  Over a period of many years, young practitioners owe their skills to this man who guided and directed them in their chosen career of architecture.’

‘He is a true activist and champion for the rights of those who were ignored and denied access to this career for decades,’ Reddy continued.  ‘He deserves more accolades beyond the one that he has received from his peers at the Institute of Architects for this huge contribution. He had his own personal struggle to attain his qualifications in the dark days of apartheid and had to have many long periods of absence between years of study to acquire the resources to complete his undergraduate and postgraduate qualifications.’

He further wished Mkhize ‘a well-deserved retirement.  We hope that he still has the energy to contribute to the betterment of our built environment.’

Upon receiving his award, Mkhize said: ‘It was a humbling and emotional feeling to be recognised by architects from my city and my province. The most touching is the fact that most of these architects know me very well. Some of them knew me when I started studying architecture as a youngster. Some knew me when I worked with them in my early stages in life and others have worked very closely with me in the work that I am being honoured for. Many thanks to the Institute of Architects.’

Also attending the awards function was Interim Dean and Head of the School, Professor Betty Mubangizi. She said: ‘I see Mr Mkhize’s award, not just as his personal recognition, but also as recognition of the institution that he is based at and, in particular the School of the Built Environment and Development studies.  In this way we are thus grateful to KZNIA and to Mr Mkhize for flying our flag high.’