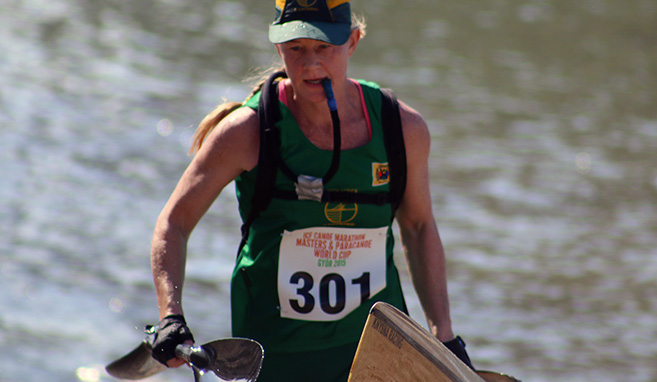 Dr Marion Young during the ICF World Championships in Hungary.

A UKZN academic is making waves, quite literally, both here at home and abroad, with a number of medals and titles in the strenuous sport of canoeing.

Dr Marion Young, of the Discipline of Animal Science in the School of Agricultural, Earth and Environmental Sciences (SAEES), has continued to display a winning streak.  Recently she earned herself two gold medals in the K1 and K2 categories in the Women’s Masters at the ICF Canoe Marathon World Championships in Gyor, Hungary.

Following her wins in Hungary, Young jetted back home to the South African Society for Animal Science’s 48th annual Congress, held in Zululand and organised by Young’s KZN branch. The theme of the Congress was “Animal Science in Practice”. In addition to playing a role in the organising of the Congress, Young presented a paper on using discriminant analysis in epidemiology of African Horse Sickness.

After the very successful Congress had wrapped up, Young headed to the Eastern Cape to compete in the Hansa Fish River Canoe Marathon in the K2 category, where she and race partner Kim Peek completed the demanding race first in the veteran women’s category in a time of 6:01:59.88, breaking the record time for that category by 15 minutes.

The tireless Lecturer made sure she kept her students up to speed in-between all of her ventures, using innovative means of communicating with them to keep their learning and research up to date on dry ground while she broke records on the water.

Young’s drive to be the best at all she does is clearly evident in her canoeing and academic achievements. When asked what motivates her to keep up the pace, she said that it is her goal to ‘live beyond average’.