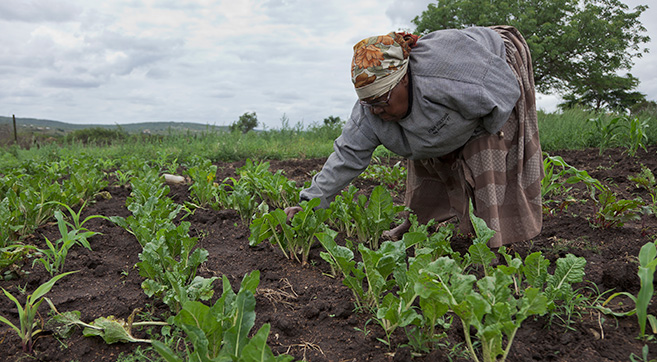 Small scale farmers of eziNgulubeni are set to go digital thanks to the Kandu App.

Empowering small-scale farmers of eziNgulubeni, uMsinga’s informal markets with digital and financial knowledge to ensure their businesses remain profitable is a passion for Bachelor of Commerce student and Enactus member, Mr Lungelo Gabela.

As the Project Manager of Umtate Wamabovu Project - a farmers’ co-operative and Enactus project consisting of 160 farmers, mostly women, operating on 60 hectares of land Gabela and his team have introduced an app known as Kandu which creates a virtual interactive platform for farmers to access harvesting and farming advice and ensures that farmers are exposed to many more markets around the province and the country. The App which won the inaugural MTN SA Foundation ICT Challenge at the 2015 Enactus National Competition this July will be fully operational by the end of  November and Gabela is looking forward to this innovation benefiting their beneficiaries.

‘The first function of the App is to highlight the problems that our beneficiaries face such as lack of financial literacy skills so that we may tackle them and organise financial literacy workshops for them. So what this App does is tackle the biggest challenge that our beneficiaries face, not having access to markets, this way we are aware of every challenge the farmers face.

‘With Kandu farmers are exposed to many more markets around the province and the country. More consumers which are made up of retailers, wholesalers and individual consumers will know about the nearest farmers to them, communicate with them and cut out the middleman ensuring the farmers are not exploited,’ explained Gabela.

In his ambit of ensuring that there is a consistent flow of income to empower the farmers to provide for their families, the co-operative has introduced a stakeholder known as the Edamame programme. Under programme, farmers have a contract to supply soya beans to the programme thus generating income to pay for their water and electricity bills. This is achieved through the farmers getting the seeds for free, planting and getting paid for the harvest. The soya bean planting started on the 1st of November and harvest season will be January and February 2016.

Looking to the future, Umtate Wamabovu has also introduced a company called Technoserve which assists small-scale farmers from all over Africa in finding markets for their produce, teaching them farming and financial skills amongst other things. The co-operative has also introduced the Agribusiness Development Agency (ADA) into the project to get supply farming inputs for our beneficiaries to further assist the farmers to be consistent in generating a profit.

‘With ADA and Technoserve we are going to setup an agrihub system where the farmers store all their produce collectively so they don't get exploited and so they can also get the produce cleansed, processed and sent to the final consumers. On top of that we're planning on introducing the Vodacom M-Pesa as a payment system for farmers so that they are not excluded if they don't have bank accounts, plus bank charges may be too much for farmers so mobile banking is the solution. We are also looking to at a potential sponsorship from Artsolar to introduce solar panels for the farmers so that their electricity problem is eliminated and this will also have a positive effect on the environment. What really touched me was on our last site visit to uMsinga when one of our beneficiaries, the chairman of the co-op, said thank you to me for all the assistance we’re exposing them to even though I felt we hadn’t done enough for them yet,’ said Gabela.

'Our vision for the farmers of uMtate wamaBovu community is to create an efficient ecosystem where the community members use the livelihood assets at their disposal to create innovative, sustainable and income generating entrepreneurial activities. We don’t get paid for the work and time we give to Enactus, it’s purely because of our passion to stretch our abilities and go the extra mile and at the same time changing real people’s lives,' stated Gabela.