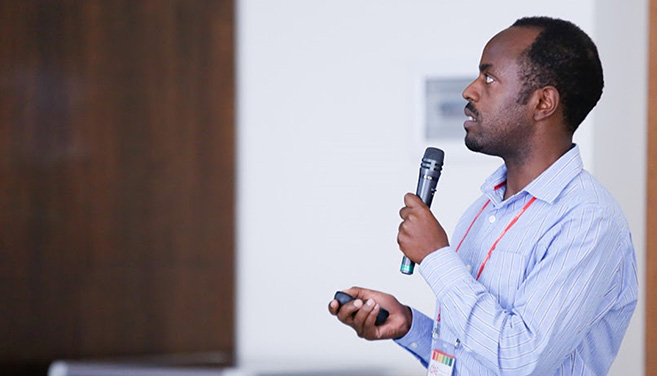 Dr Patrick Hitayezu giving his presentation at the IAAE Conference in Milan.

UKZN academic Dr Patrick Hitayezu, who recently completed his PhD degree in Agricultural Economics in the School of Agricultural, Earth and Environmental Sciences (SAEES), presented two papers from his PhD research at two high-profile international conferences during the course of 2015.

One paper was presented at a conference themed “Our Common Future under Climate Change (OCFCC)” held in July at UNESCO and Université Pierre et Marie Curie in Paris, France. The Conference built on recent climate studies to deliver scientific messages for the upcoming Conference of Parties (COP21) to be held in Paris in December 2015, which seeks to assess the implementation of political responses to climate change globally.

During a session on perceptions of climate change, Hitayezu presented the findings of his study on factors shaping climate risk perceptions among small-scale farmers in the Midlands region of KwaZulu-Natal. The study applied a behavioural approach to help understand why farmers living in the same region would perceive local climatic changes in different ways. His findings indicated that perceptions tend to differ based on farmers’ underlying learning processes, with major implications for the climate change information communication policy in South Africa.

Hitayezu presented another paper at the 29th triennial conference of the International Association of Agricultural Economists (IAAE) held in Milan, Italy, in August. The conference was themed “Agriculture in an Interconnected World”. His presentation, given during the land-use session, showcased the application of a mixed-multinomial logit model to the assessment of attitudes and constraints governing small-scale farmers’ land-use change decision-making in the Midlands region of KwaZulu-Natal.

This study revealed that social motives such as food security override income generation and ecological incentives, which are the common foci in agricultural land use policy in South Africa. The study also showed that decision-making regarding agricultural land-use change is governed by economic factors, social influences and agro-ecological characteristics, with implications for sustainable land use policy in South Africa.

Hitayezu was supervised by Professors Edilegnaw Wale and Gerald Ortmann of Agricultural Economics in SAEES.